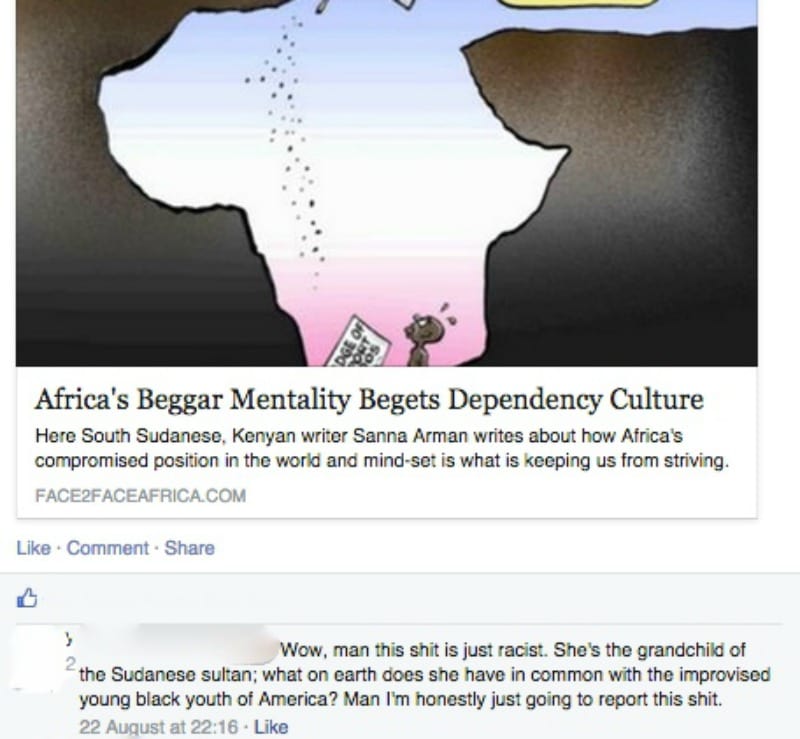 Whenever one puts their work out to the public, there is bound to be criticism, both constructive and otherwise. Most times you go by the cliché ignore the negative and use the constructive. Once in a while, you receive feedback that is neither positive nor negative, but rather amusing.

In my article “Africa’s Beggar Mentality Begets A Dependency Culture,” I wrote among other things:

The Black man’s life is a cheap one regardless of geographical location.

In America, a White man who carries out a mass shooting is arrested, due process is followed, and a trial afforded to him. An unarmed Black man, on the other hand, is guilty by virtue of being Black and receives bullets to his chest, regardless of whether he has committed a crime or not. And in Africa, a cure that could prevent the loss of lives from the Ebola outbreak is being afforded to American life but not African life.

Afterward, I received a complaint (pictured) that my writing is “racist” and asked what the plight of the Black man in the United States has to do with me as a Sudanese, I thought this was worthy of a response, because even though it is an opinion expressed by one person, it is one that Black people who are vocal about racial issues — without lavishing in the wings of political correctness — often receive.

Let me start by saying that unlike those who claim to be “color blind,” I choose not to deny my seeing of color, thus my addressing of this letter to you as I have. You see, the “color blind” claim is one only the blind, with all due respect, can make. For it is not the acknowledgement of color that is the issue, but the intention with which the acknowledgement is made.

In fact, the push for a colorblind world is almost as dangerous an issue as racism. That said, while I am sorry that you are offended, though, I am not sorry, that “I offended you.”

To be clear, it is not that I do not care about the effects my words may have on you or any other reader. Honestly, I do. In your case, though — and in that of others who may share similar views with you — I simply find your offense invalid.

Your taking of offense to my article stems from the claim, and question that:

Alexander Pope once wrote, “A little learning is a dang’rous thing/Drink deep, or taste not the Pierian spring.”

Allow me to take his words out of context and state that selective reading is a dangerous thing, as the premise of my article had little to do with the points you raised, which means you read it from the start with the intention of tearing it apart to find what you are looking for rather than understand what I was writing on.

Nonetheless, I believe your taking offence deserves a response.

Vis-à-vis racism, I will begin with a definition of racism. The oxford dictionary defines racism as “the belief that all members of each race possess characteristics, abilities, or qualities specific to that race, especially so as to distinguish it as inferior or superior to another race or races”

“Prejudice, discrimination, or antagonism directed against someone of a different race based on the belief that one’s own race is superior.”

Going by these definitions, nowhere in my article do I state, or even imply that the Black man is superior to the White man.

I would like to make this letter as concise as possible. I am therefore not here today to give you a comprehensive account on how we live in a White supremacist world, as you did not challenge that fact. However, I am happy to concede if you can empirically disprove this, just as I can empirically prove it.

If your issue is that my expression, and choice of words do not fit your politically correct cup of tea, I should probably tell you that my duties are only limited to highlighting injustice, not rubbing the backs of the perpetrators to see which shoe fits them better.

Additionally, I am not sure if you actually read my article. Had you done that, you might have seen, in my discussion of Western policies toward Africa, a paragraph in bold that reads:

“At the U.S.-Africa Summit in Washington earlier this month, U.S. President Barack Obama proclaimed in a speech, ‘We don’t look to Africa simply for its natural resources. We recognise Africa for its greatest resource, which is its people and its talents and its potential.’

As the famous saying goes, “Talk is cheap.”  We need to look no further than Congo to see how much Africa is recognised for nothing else but its resources.”

Seeing as, the last time I checked, President Obama is a Black man, and going by whatever definition of racism you have construed, does this mean I am racist toward those who look like me too?

Regarding the question you pose on what the Black man in the United States has to do with me since I am from Sudan, I have seen White men march alongside Black men in solidarity. Going by your theory of proximity, what on earth do they have in common with the Blacks in the world?

I have marched alongside Palestinians in solidarity.

Again, going by your theory of proximity, let us ignore the fact that I AM BLACK for a minute, like you did, and that my skin is criminalized, what on earth do I have in common with the Palestinians?

Now, let us address the fact that I am BLACK. That millions of BLACK lives were lost during slavery and colonialism; that there are disproportionate amounts of BLACK men in prison, not only in the United States, but also in England, where I am currently based; that the world’s fiscal structure is set up in such a way that AFRICAN AMERICANS, BLACKS in the world, and AFRICANS, alike, remain impoverished; that what they all have in common is a White supremacy system that dictates that BLACK life is dispensable (as I said) REGARDLESS OF GEOGRAPHICAL LOCATION.

As aforementioned, my duties are only limited to highlighting injustice, not rubbing the backs of the perpetrators to see which shoe fits them better. As you appear to have taken an oath to report my “racist” article, I think you should brace yourself, winter is coming and you will be reporting a lot more articles if it is political correctness you seek from me because YOU ARE NOT THE VICTIM AND NEVER HAVE BEEN.

But of course, your privilege will not allow you to see this, to understand that every Black man’s face is the face of slain 18-year-old Mike Brown.

Therefore, I suggest you try some role-play reversal some day: try to fit the Black man’s shoe – it is a luxury afforded to you, but not to the Black man. Perhaps then, the oppression depicted in my writing will offend you, as it does me, more than the non-existent notions you choose to take from it.