The Black man’s life is a cheap one regardless of geographical location.

In America, a White man who carries out a mass shooting is arrested, due process is followed, and a trial afforded to him. An unarmed Black man, on the other hand, is guilty by virtue of being Black and receives bullets to his chest, regardless of whether he has committed a crime or not. And in Africa, a cure that could prevent the loss of lives from the Ebola outbreak is being afforded to American life but not African life.

“An American doctor who contracted ‪#‎Ebola while treating victims of the deadly virus in ‪#‎Liberia has recovered. Dr. Kent Brantly is due to be discharged today after being treated with an experimental drug ‪#‎Zmapp in an Atlanta hospital in the United States. Three other doctors also treated with the drug in Liberia have also shown significant signs of improvement. However, the company that produced the serum says they have none left.” (Source BBC AFRICA – Facebook)

On reading this status, I was reactionary. I was caught up in a chain of reflection on how the Black man, from whom modern civilisation was molded, has been reduced to nothingness and otherness. I was trapped in the how? When I should have been focused on the what now? – A realisation that came after a friend responded with this comment:

“We are a continent plagued with the culture of begging and dependency. We have been conditioned to expect others to solve our issues. When SARS broke out in China, the Chinese found its cure for their people. We have scientists, we have doctors, we have pharmacists, we have universities, we have laboratories, we have governments, and most of all we have brains…

“The real question should be why are we so exposed and vulnerable when met with such epidemics? – This is the time we should look up to and expect ourselves, our leaders and institutions, to act rather than resort to blaming an American pharmaceutical company who owe us nothing and thus has no interest whatsoever in our well-being.” (Kelvin Amoako)

It is true that we were slaved, enslaved, and colonised. We were exploited and are still being exploited. We were underdeveloped while the West developed AFRI-AID at the expense of Africa.

But how long can we dwell on this?

At the U.S.-Africa Summit in Washington earlier this month, U.S. President Barack Obama proclaimed in a speech, “We don’t look to Africa simply for its natural resources. We recognise Africa for its greatest resource, which is its people and its talents and its potential.”

As the famous saying goes, “Talk is cheap.”  We need to look no further than Congo to see how much Africa is recognised for nothing else but its resources.

Whether Africa is disease, hunger, war, or poverty-ridden is not something the West and others 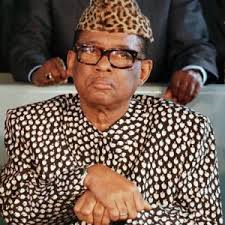 care much for. It does not take much to see the pattern of exploitation: helping achieve “peace“ is of interest only when it concerns resource-rich African countries. And where there are the Paul Kagame’s (Rwanda) and Yoweri Museveni’s (Uganda), the West can dirty their hands on a minimal while African puppets follow the lead of the likes of (pictured at right) Mobutu Sese Seko.

That we still have puppets today puzzles me. Congolese dictator Mobutu, after exploiting his people and crippling a nation that continues to be exploited until this day, was rejected by his Western allies following his exile in 1997.

The friendship came to an end as soon as he was no longer in a position to supply resources; France outright refused to give him asylum.

We have failed leadership. Most African countries lack STRONG, COURAGEOUS, and INDEPENDENT leaders. Leading us are individuals who do not pose a threat because they do not threaten the structures that seek to constantly keep Africa on its knees. 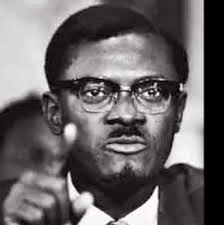 Where are the Patrice Emery Lumumbas (pictured above) with the interests of the people at heart? Where are the leaders who pose such a great threat that they live every day risking their lives? After all, is that not the real essence of leadership?

Now imagine a scenario where I come to your house uninvited, and because I believe myself superior to you, I make you, the master of the house, my slave. When you are finally free of my shackles and are back to being master of your house, I still force you to feed me from miles away and consult me before selling any food from your farm.

Fourteen former French colonies are, and have been paying colonial taxes to France. The colonial pact allows France to have a say and grants it a seat in the political and economic affairs of these nations. They cannot even sell natural resources before consulting France to find out if it is interested in buying them, regardless of whether they would make more profit selling elsewhere. In fact, they might as well be classified as French colonies in the 21st century and not independent countries.

Not only do I bring this up to show how ridiculous it is, but I do so also in an attempt to emphasize on an already known fact: Africa is not a poor continent. Africa is a rich continent lacking in progressive vision on the way forward because every hole in these 14 nations, as someone well put it, is a skyscraper somewhere in France.

We have been feeding all other mouths, but our own, which is rather ironic because “charity begins at home.”

In his letter to his wife Pauline, Lumumba wrote:

“Without dignity there is no liberty, without justice there is no dignity, and without independence there are no free men.”

We need to realize this is OUR problem, and is not one confined simply in failed institution or failed leadership, but that we, as a people, have failed too. As the African proverb goes, “It takes a village to raise a child.”

The top-down approach is futile, and it takes a people, collectively, to build a nation. We need to realise our freedom will not be given, it must be taken.

Moreover, we must realise that a system built on discrimination and injustice will — and can never be — reformed with an equal and just one; such a system can only be replaced as it was flawed from inception.

From where I stand, African countries lack even the ability and leadership to prevent the exploitation of their own lands and dictate how the West should ideally function.

What we can do, and have the ability to do, is dictate how African nations should function. The “big happy family” vision is great, socially viable, and one we should all preserve to ensure we do not become isolationists or separatists. However, economically and politically, we need to restructure and build an African success story based on African values.

We need to remember that not all development is good development. Instead of looking to duplicate western structures that we have witnessed the rise and fall of over the years, we need to look at creating structures that work in the African context by building on the good from everywhere, be it China or the United States.

We must also be keen to note that Africa, historically, is community-based. The Africa philosophy of Ubuntu must live on if we are to seek progress and development that is comprehensive, and holistic.

Most importantly, we need to realise that only we can help ourselves, and we all have our parts to play, respectively. We cannot be singing and chanting “Africa Rising” or “Africa Unite” decades in, decades out, while making no move toward it.

How soon we witness a new dawn in Africa depends on how soon we stop waiting to be saved, and start saving ourselves.