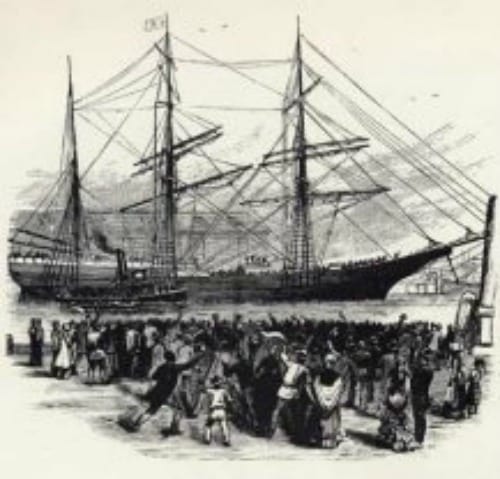 The Liberian Exodus was part of a large emigration effort to return freed Blacks and former slaves to Africa in a government-supported effort. The exodus, which was plagued by problems, began on this day in 1878 from a port in South Carolina.

Although Congressman Richard H. Cain’s call that a million Blacks return to their homeland came across as a noble gesture, historians caution that this may have been part of a ruse. A pamphlet produced in 1878 oversold the virtues, climate, and opportunity present in Liberia. The pamphlet spoke of the country in universally glowing terms, taking measures to not present a potential for hardship.

There were claims allegedly told to emigrant Blacks that potatoes grew so big in Liberia that one could feed an entire family. There were also other claims of bacon growing from trees and other fanciful bits that the emigrants would eventually learn was untrue.

And there was plenty hardship on the journey over.

The ship, named Azor, pushed out from the town of Charleston with 206 emigrants on board — not including reporters and ship staff. The journey turned deadly, as water supplies dried up before the two-month journey was completed and food was not of high quality.

Consequently, 23 emigrants died on the trip and many arrived to Liberia sick and impoverished.

For many emigrants, the conditions found in Liberia were so challenging that 18 of them returned to the United States on another boat in 1879.

But some of those that stayed did eventually find their footing. One emigrant, the Reverend David Frazier, owned a 700-acre coffee farm. Another, C.L. Parsons, became the country’s chief justice. And another, Daniel Frank Tolbert, was the grandfather of late-former President William R. Tolbert Jr.

SE ALSO: Jamaican ‘Back-To-Afrika’ Delegates Arrive In Ethiopia On This Day in 1961