Towards the end of 1963, three ladies were recruited into the Ghana Air Force to be trained as Ghana’s first female pilots, and Melody Millicent Danquah was one of them.

She enrolled in the Air Force after reading an advert in a newspaper during the tenure of the first President of the Republic of Ghana, Dr Kwame Nkrumah.

The president had asked women to apply to be trained as pilots as part of efforts to build an effective armed force and improve the aviation sector.

Danquah finished first in her class and as Flt. Cadet Danquah, she flew solo for the first time in a de Havilland Canada DHC-1 Chipmunk aircraft on June 22, 1964. This made her the first Ghanaian and African woman ever to fly an aeroplane single-handedly.

In October 1964, she became the only student pilot allowed some ten minutes of solo flying time during an Air Force Day organised in Takoradi, where she ended with a spotless landing to the admiration of many including Dr Nkrumah.

On April 15, 1965, Danquah was presented with her Wings as a qualified pilot by Kofi Baako, the then Minister of Defence. 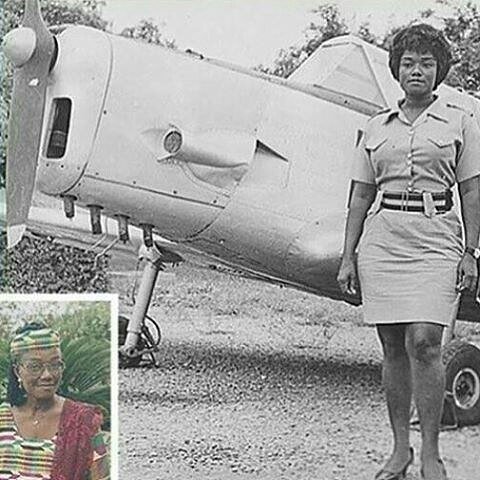 The Squadron Leader ended her flying career in June 1968 and was transferred to the Administration Branch of the Force.

Due to ill-health, Danquah was discharged from the Force in 1984 and was given a Long Service award and The Efficiency Medal.

In 2006, former president John Kufuor honoured her with the Companion of the Order of the Volta in recognition of her groundbreaking spirit and courage.

When she came out of the military, Danquah worked briefly for the World Food Programme and National Service Secretariat.

At age 60, she entered the Bible School where she earned her Diploma in Bible Studies and Theology and preached in military circles as a lay preacher.

She later became a member of the Board of Directors for the Ghana Institute of Management and Public Administration (GIMPA) with Prof. Stephen Adei as the Rector.

Danquah had an acting talent while she was pursuing her secondary education at the Wesley Girls’ High School at Cape Coast.

She was born to Ghanaian parents – Ibinijah Rexford Addo-Danquah, a Court Registrar and Arbitrator in Larteh and Selina Gyamfi – on January 6, 1937, in Larteh Akuapem. Affectionately called M3, Danquah was the sixth of ten siblings.

She passed away on March 18, 2016, at the age of 79. She is survived by her daughter, Professor Angela Lamensdorf Ofori-Atta, a Clinical Psychologist at the University of Ghana School of Medicine & Dentistry and three grandchildren.