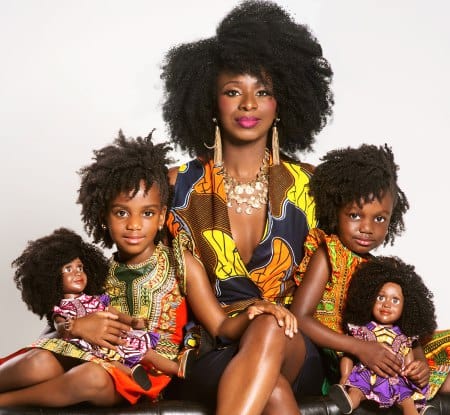 Mushiya Tshikuka, breakout star of WEtv’s reality hit show “Cutting It In the ATL” is a mesmerizing, magnetic presence. As founder of The Damn Salon, she has married high-fashion, edgy aesthetics with the celebration of women’s curly and kinky textures to usher in a “New Era” in Natural hair. With risqué marketing and bold styles that emphasize volume and funky pops of color, Mushiya and The Damn Salon have transformed attitudes toward natural hair across the nation. The Damn Salon’s touring salon division, Taste of Damn, hosts pop-up styling suites in cities like Oakland, Houston, New York, Washington D.C. and Charlotte.

Originally from the Congo, the Natural Hair Boss came to the US by way of Montreal, which gives her a cosmopolitan flair. As part of her mission to redefine the idea of natural hair and provide women with more options to celebrate curly and kinky textures, she launched Runway Curls, a line of 100% Human Hair and Blended Extensions that flawlessly blend with natural curl patterns. Mushiya’s inclination to teach self-love and enthusiasm for black womanhood is eminent in all she creates. Her creation of My Natural Doll, Keleshe, gave her the opportunity to personify the underappreciated beauty of brown-skinned, kinky-haired young girls deserving of a doll that looks like them made.

Mushiya is an engaging thought leader with VERY defined opinions on today’s beauty culture, earning her over 6 billion media impressions from both national and international coverage. Top press mentions include ESSENCE, Sophisticate’s Black Hair Magazine, Daily Mail UK, Allure, and NaturallyCurly.com to name a few. Mushiya has also performed at Essence Fest 2016 on the Beauty & Style Stage, in which she showcased the beauty of Black women and natural hair in a “Rock the Runway” style presentation.

Blessed with multiple talents, Mushiya is also a singer who records original tracks that stay embedded in your head long after they end.