American media may be expecting some headline-making welcome or worse, a protest of a sort for the United States First Lady Melania Trump who arrived in Ghana on the first leg of her four-nation Africa tour.

But, NO, no one cares especially after all the ill-treatment and disparaging remarks made against migrants, children of migrants and Africa by her husband Donald Trump who sang a very different tune about Africa ahead of Melania’s visit.

“We both love Africa. Africa is so beautiful, the most beautiful part of the world, in many ways,” he said days before his wife arrived, nine months after he said Nigerians were living in huts and African nations, Haiti and El Salvador were “shithole” countries. He even called immigrants animals.

Now, Melania Trump is in Ghana to “educate herself on the issues facing children on the African continent” while children of immigrants including Africans are being kept in cages by her husband without any remorse.

She also wants to focus on maternal and newborn care in hospitals and how the United States is supporting each country on its journey to self-reliance. Meanwhile, minority groups and immigrants in the U.S. have little access to affordable health care as Trump has made the country an increasingly hostile social and political environment.

She will be most appreciated if she had rather convinced her husband to release the detained children who were separated from their immigrant parents for the crime of wanting a better life in the United States.

School children in Ghana were made to leave the classrooms and wave Ghana and U.S. flags at the Kotoka International Airport after her arrival with little enthusiasm. 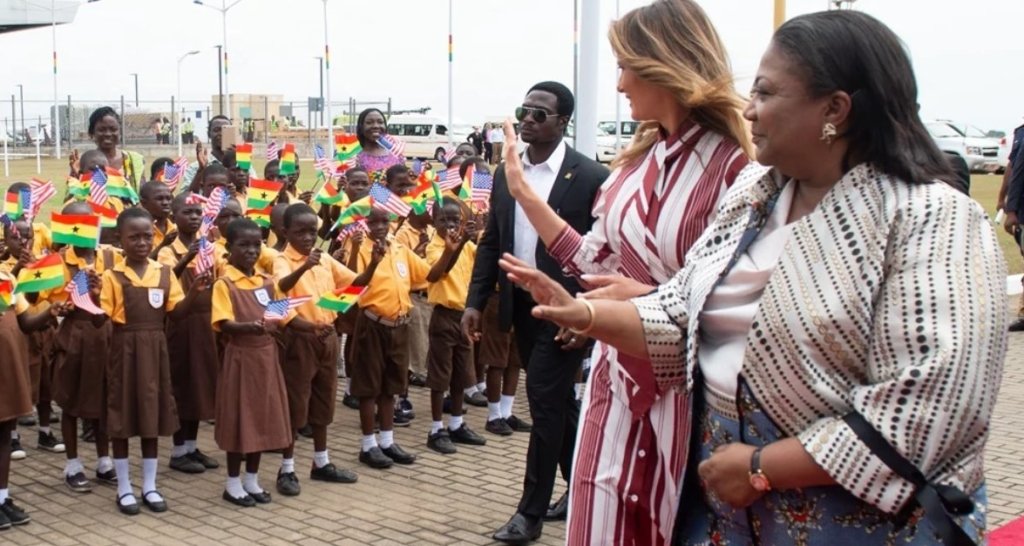 Streets were blocked for her convoy to pass to the clinics and hospitals in Accra with Ghana’s First Lady Rebecca Akufo-Addo to distribute toys and hold babies for photo moments. 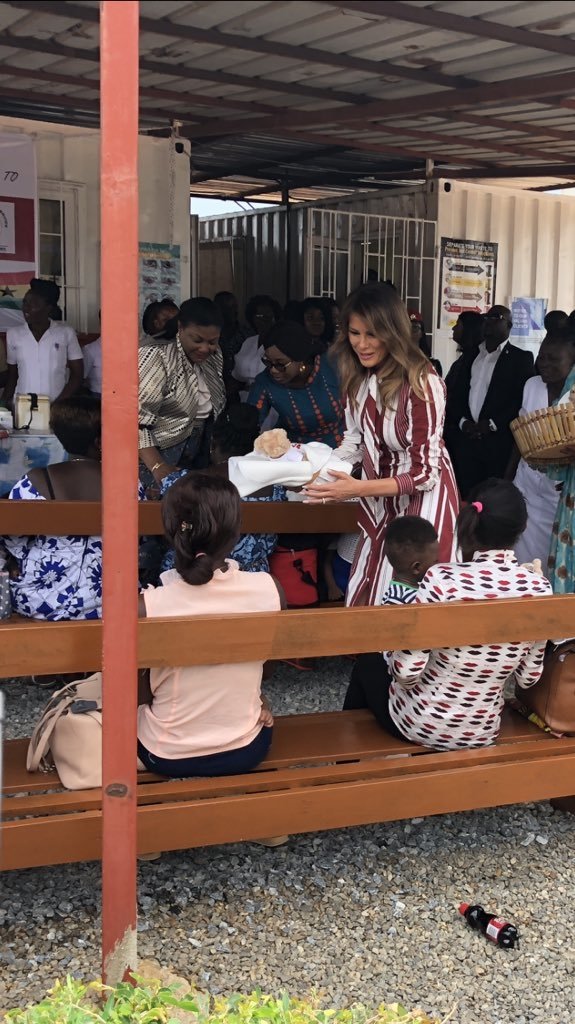 Commuters were caught on camera looking on without any interest in the First Lady as documented by Jennifer Jacobs, White House reporter for Bloomberg News.

People stood on sidewalks in Accra, Ghana, as Melania Trump’s motorcade traveled by, but there was little visible reaction—few waving hands, and no homemade signs (in support or protest). pic.twitter.com/z6RBHGXHaV

It is a regular day in Accra and NO ONE CARES.

Read some reactions to her visit below as she plans to continue to Malawi, Kenya and Egypt.

No one is going to stand on the streets this hot afternoon to welcome Melania unless she’s here to grant free Visas.

As for protests, unless someone is providing refreshment we really don’t have the time

THIS IS WHAT YOU SHOULD KNOW … 1. Cant be bothered 2. means nothing to us ? pic.twitter.com/hft4vYOEOo

Today is a working day in Ghana
So we should close our offices and come and stand at roadside to Wave Melania Trump ong ?

Who is this woman? Why she is here??

Weak welcome. Nobody’s there except some asking who’s Melania. ?

we don’t really care coz we have better things to worry about right now in Ghana… She’s here in Ghana, Yes….she’s only here for the photographs & nothing more…

This is right in front of the hotel she arrived at, as you can see, nobody gives a f*vk! pic.twitter.com/0JW8loklzZ

Because they don’t like what Melania stands for. I wouldn’t want my kid even touching her hand.

It air coming out of her mouth.

They took kids out of school to wave flags for Melania. Why do they keep doing these things? Why?? pic.twitter.com/JxXI8E5OMX