A signed letter from Muhammad Ali to Nelson Mandela has sold for more than $9,000 at a recent auction in Wiltshire, England. According to  BBC, Ali wrote the the letter to offer his condolences over the assassination of Mandela’s anti-apartheid comrade Chris Hani.  The letter, which was typed on paper that carried a “Muhammad Ali in South Africa” letterhead, is dated  April 10th, 1993.

Hani, a leader of the militant wing of the African National Congress known as the Umkhonto We Sizwe, was gunned down by a South African far-right extremist outside of his home in Boksburg.

Ali arrived South Africa a few days ahead of Hani’s burial ceremony and the letter, which contains a misspelling of Ali’s name as “Mohammed” instead of “Muhammad,” is believed to have been typed by the personal assistant of the general manager of the Elangeni, the hotel in Durban where Ali was staying at the time.

Lead Auctioneer Andrew Aldridge of the Wiltshire-based Henry Aldridge & Son said that the letter, which was sold to a collector in the U.S., is considered “a rare, invaluable piece of history.” 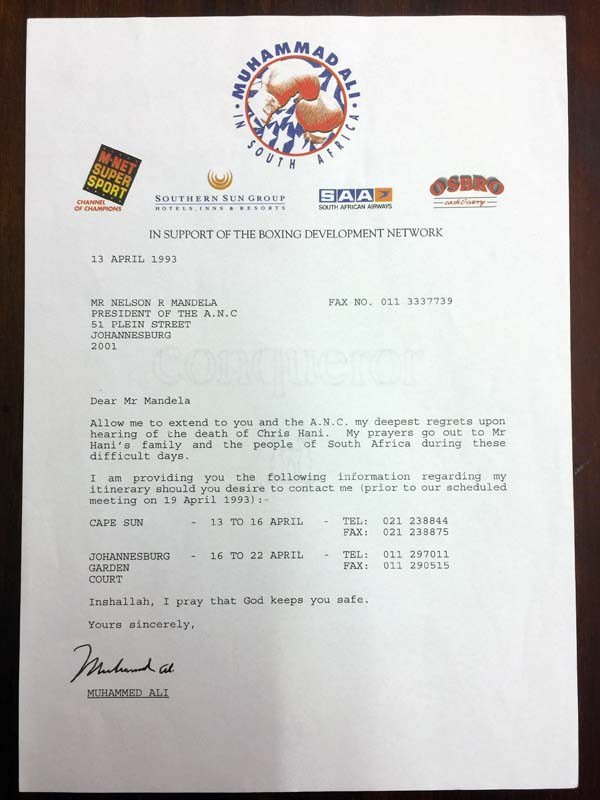 “It is fair to say Muhammad Ali was the greatest sportsman of all time and Nelson Mandela was one of the greatest figures of the last century. It is a truly iconic cross-collectible and will appeal to collectors of Ali memorabilia, as well as those who collect Nelson Mandela material, items relating to [the] Apartheid, political history, and collectors of iconic memorabilia.” .

Aldridge claims that Mandela kept a photograph of himself with Ali on his desk and in his later years, his favorite book was an autographed copy of Ali’s biography, “Greatest of All Time.”