For a Nigerian man who came to Italy as an immigrant to belong to the anti-immigration League party and to propose ways to deport migrants, this would seem surprising. But what is more interesting is the fact that the Italian man of Nigerian origin has been elected as the country’s first black senator.

Tony Iwobi, whose far-right League party has been accused of fueling racism in Italy, was elected in the industrial city of Brescia in northern Italy on Sunday.

The 62-year-old Iwobi of Spirano in Lombardy announced with joy on his Facebook page on Tuesday that he had been elected to the Senate.

“I am very thrilled to tell you that I have been elected senator… A new adventure is about to begin,” Iwobi wrote after Sunday’s election.

Iwobi was born in Nigeria but came to Italy on a student visa about 40 years ago. He went on to marry an Italian woman before starting his own IT company. He has since been a supporter of the League for more than two decades and has been campaigning with the slogan #StopInvasion, which is in reference to the over 690,000 migrants who have landed on Italian shores from North Africa since 2013. 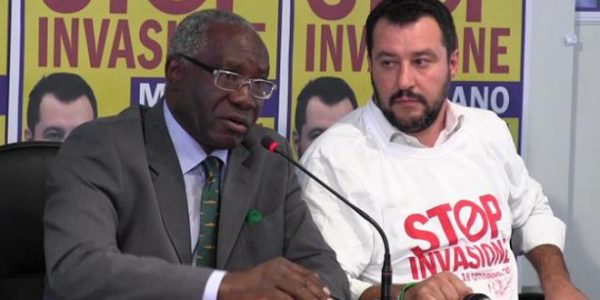 He has, along with party leader Matteo Salvini, been arguing that illegal immigration into Italy resulted in an increase in racism.

Before running for senator, Iwobi became a town councillor for the League at Spirano in 1995. He subsequently became the head of Salvini’s national committee on immigration, where he helped write the League’s anti-migration platform which came up with several proposals on for instance how to facilitate the deportation of migrants, how to reject migrants rescued by NGOs from the Mediterranean and how to get countries to agree to repatriate their nationals from Italy.

Even though his views may appear surprising considering his own background, Iwobi says he is not against immigrants who, like himself, come to Italy legally. He is, however, opposed to those who seek to stay in Italy illegally.

Iwobi is one of the few black members of the League. The leader of the League has over the years been accused of making insurgent remarks about non-Italians and Muslims. Iwobi, nevertheless, insists that the party is not racist.

“Racism means thinking yourself better than others, while in the movement I find many firm positions, but also a lot of respect,” he told the Corriere della Sera.

Italy’s general election on Sunday resulted in a hung parliament in which no single party or coalition commands an overall majority.

Salvini’s League was the winning party in the right-wing alliance that took the most votes on Sunday but did not make the overall majority. Parties are now bidding to form a working coalition government.