Mourners in a suburb of Kumasi, Ghana’s second largest city, buried 27-year-old Richmond Osei Tawiah yesterday amid great ceremony. Tawiah is alleged to have been a victim of police brutality after he was picked up in Krofrom on May 26; however, an autopsy report released by the government-run Okomfo Anokye Teaching Hospital (KATH) indicated that he died of a heart attack.

Osei’s relatives dispute the results, however, expressing suspicion that the doctors are complicit in covering up his true cause of death. At yesterday’s funeral, visibly distressed relatives and family clearly wanted justice to be done. They believe their loved one was viciously beaten to death by three police officers who took him to be a criminal.

As his body lay in state, Tawiah’s family members rained curses and cast spells on his suspected killers. They were careful to surround his corpse with what some may consider odd assortment of items: a bullet cartridge, machete, chili pepper, a raffia broom, a sponge and a pair of shoes. The items are talismans reputed to have been requested by the deceased through a spirit medium which would empower Tawiah’s spirit to avenge himself from the land of the dead.

Ghanaweb reports that such spiritual assistance was invoked even before the funeral against a policewoman who was somehow suspected of involvement in Tawiah’s death:

“ACP Ampofo Duku, the Deputy Ashanti Regional Police Commander, who made the disclosure, said the people used eggs and schnapps to curse the policewoman ‘even in her absence outside the crime scene.’

“He said that the angry-looking people also threatened to kill the policewoman and her family over the death of Tawiah.” 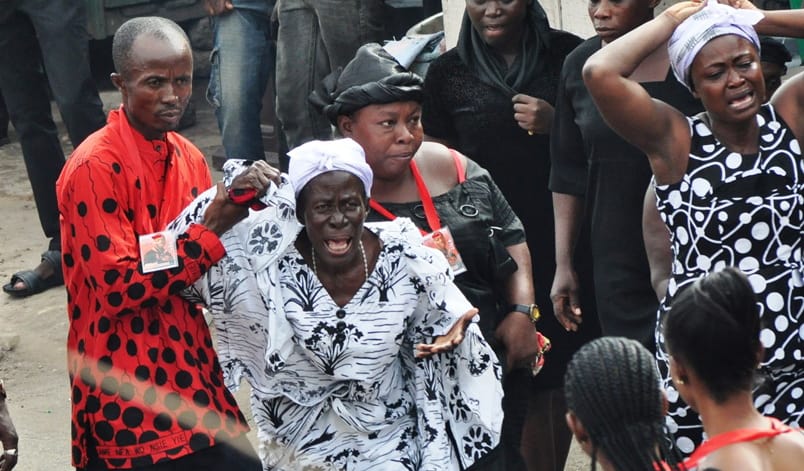 Richmond Osei Tawiah’s grandmother, center, mourns the life of the man whom she raised since age four. Graphic Online

Neighbours and mourners at the burial generally approved of the the grief-stricken family’s actions. A spokesman for the family, Kofi Boadi revealed that they had warned police representatives to stay away from the funeral. Before the burial, community members staged multiple demonstrations demanding justice, a proper investigation, and prosecution of those involved in Tawiah’s death.

Ghana Police Service and appropriate authorities have been slow to release an official statement condemning the actions of the police or promising a full and extensive inquiry into the cause of Tawiah’s death. In the end, actions by Ghanaian authorities will probably be limited to dispersing any persistent protesters and offering a lukewarm promise to set up a panel of inquiry. Any such behaviors would make them guilty of forgetting the words of Martin Luther King, Jr., who said “true peace is not merely the absence of tension; it is the presence of justice.”

In the 21st century, casting spells and resorting to spiritual intervention as a means to avenge the death of the guiltless may seem outlandish and crude to some. However, it is a clear indictment of a broken judicial system and a lack of conviction in the state-approved instruments for seeking lawful redress.