An association of Moroccan geologists have demanded the repatriation of a 30-foot (9m) dinosaur fossil from France.

On Tuesday, Moroccan geologists denounced the planned auction of a 66-million-year-old marine dinosaur skeleton in Paris and asked that the remains be repatriated, reports the Daily Star.

The plesiosaur, a 9-meter-long marine reptile with a long neck and turtle-like flippers, was discovered by archaeologists in a phosphate basin near the Moroccan city of Khouribga.

Experts believe plesiosaurs may have inspired the Scottish legend about the Loch Ness monster.

“The plesiosaurs were among the most emblematic ‘giant primitive beasts,’ which have intrigued scientists and amateurs for centuries,” Paris-based auction house Drouot said in a statement.

The Association for the Protection of the Geological Heritage of Morocco (APPGM) criticized the planned auction, describing the skeleton as a “unique patrimonial treasure.”

The association mandated Morocco’s chief geologist to find out if the fossil had been authorized for export. The association further said it would urge Moroccan authorities to “intervene with the organizers of the sale to restitute the plesiosaurus to its country of origin, Morocco.” 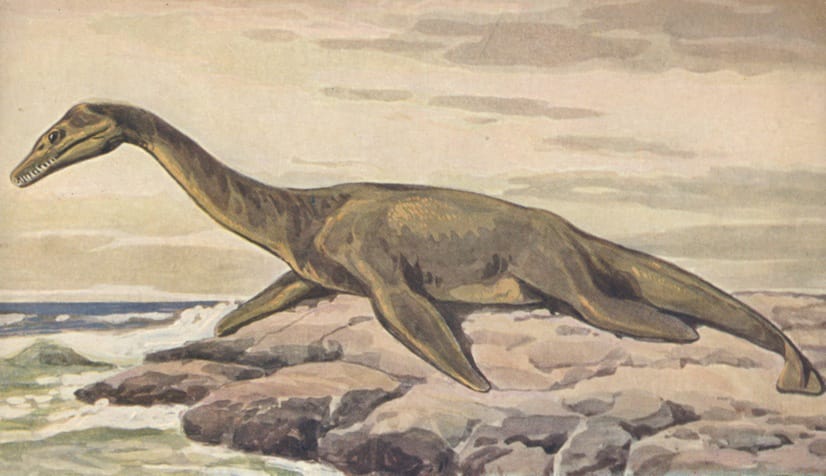 Experts believe the plesiosaurs may have inspired the Scottish legend about the Loch Ness monster.
Photo credit: Tylers crytozoo

APPGM added that while Morocco’s geological heritage was globally recognized for its richness and diversity, “in the absence of regulatory texts … this heritage is undergoing a systematic and continuous deterioration.”

Representatives of Drouot auctioneers maintained in a statement, however, that the specimen had satisfied all custom requirements, adding that it had been “checked by customs and heritage authorities in Italy” prior to being prepared for sale.

“This specimen is the only complete specimen of … museum quality on the market, and the first available for a private collection.”

Local media in Morocco, quote a senior official of Moroccan Ministry of Energy and Mines as saying the remains had been smuggled illegally out of Moroccan territory, with Medias24 reporting that the Foreign Ministry had been asked “to inform the French authorities of the illegality of the sale and to request the return of the skeleton to its country of origin.”

The plesiosaurs’ fossil, which is 75 percent complete, will go on display at the Paris auction house from March 4th to 7th.

Moroccan authorities are yet to issue an official statement on the matter.