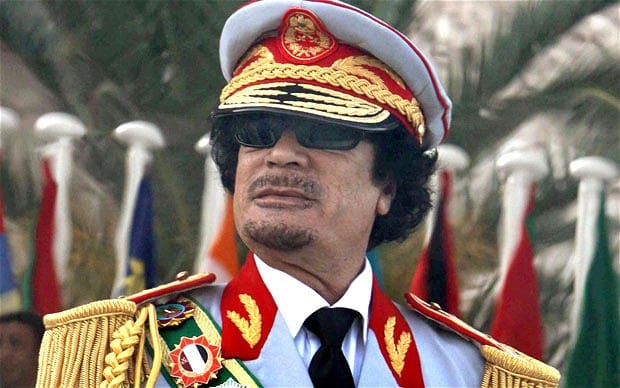 One of the most dreadful African leaders ever to lead Libya in her checkered history was the late Muammar al-Qaddafi. Also known as the “King of Kings of Africa,” he ruled Libya for over 40 years with fist, sword and at times with “strange” love. He became a leader so early – at the age of 27 – and immediately proclaimed his intention on the world stage by shutting down the American military bases in Libya. He was a thorn in the flesh of leaders all over the world. Apart from the fearless President Mugabe of Zimbabwe, no one ever among African leaders has dared the “powers that be” in the international arena like he did.

Muammar al-Qaddafi wined and dined with the world, and was a friend to powerful leaders all over the world, including former Italian Prime Minister Silvio Berlusconi. He supported Ugandan president Idi Amin during his reign of terror. He aided Jean-Bedel Bokassa of the Central African Empire, Robert Mugabe of Zimbabwe, Charles Taylor of Liberia, Ange-Felix Patasse of Central African Republic and so many other leaders who reigned like himself. He supported guerrilla groups all over the world to threaten his perceived enemies in the international system. His troubles all over the world earned his country sanctions from United Kingdom, Australia, etc. His grandiose plan for a United States of Africa was not realized before his death.

His poor human rights abuse, unrivalled corruption and personal aggrandizement made the whole world turn against him. He was killed in 2011 by the people of Libya with international support.