Sunday night’s closing ceremony for the 2016 Rio Olympics paid special tribute to a little-known group of Afro-Brazilian women who made a big impact on the nation’s culture. They are the lace-makers.

Unlike many mainstream media outlets, which focused more on the presence of Nintendo video-game character Mario the Plumber and the festive Carnaval scenes, the website Romper delved deeper into the lace-makers’ history and traditions with two articles about the performance and accompanying light show, which beamed intricate, geometric lace patterns across the floor of Maracana Stadium in Rio de Janeiro.

“Who is the woman in all white at the closing ceremony?” Keiko Zoll, a Romper staff writer, asks. “She was joined by dozens of other women, all bedecked in white dresses with beautiful, white head wraps… a stunningly beautiful tribute to Brazil’s Bahia culture.”

Mariella Mosthof, who wrote the earlier Romper article, has the answer: “They represented the iconic Brazilian tradition of bilro lace weaving, which came to the country through Portugal, but the segment itself lent vital visibility to Afro-Brazilian women who often fall victim to the country’s deeply ingrained racism.”

When Portuguese colonizers began to conquer the South American territory in the 1600’s, they brought along many familiar traditions from the Old World. One such tradition was lace-making. While still relatively inexpensive compared to European laces, Brazilian-made lace has gained a reputation over the centuries for its quality and beauty. 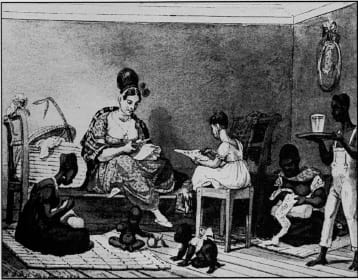 Portuguese slave owners gladly turned this art form over to the women they held in bondage. In turn, some of the women were allowed to sell their lace in the markets, keeping a portion of their earnings and turning the rest over to their enslavers.

While some authors center Brazil’s lace-making tradition is centered around Fortaleza and Ceara, where slave labor was not used as frequently, the Olympics tribute was focused more on Bahia, which is “often considered the heart of Brazil’s Afro-Brazilian culture, with the nation’s highest population of Afro-Brazilians,” according to Zoll, and where “lacemaking is another cultural hallmark.”

Ironically, but perhaps unsurprisingly, the lace-makers inhabit some of Brazil’s poorest areas, where basic amenities like running water and nearby food markets are not readily available. These lace-makers see very little of the profits that their hard work generates. Ilma Paixao, a Brazilian expatriate, told the Boston Globe, “Savvy traders often haggle the asking price to about $30 per item, she said; that means the women are working for just $13 to $17 a month.” Paixao teamed up with another Brazilian at Harvard University to provide business training that helps lace-makers earn a livable wage from their highly sought-after crafts. 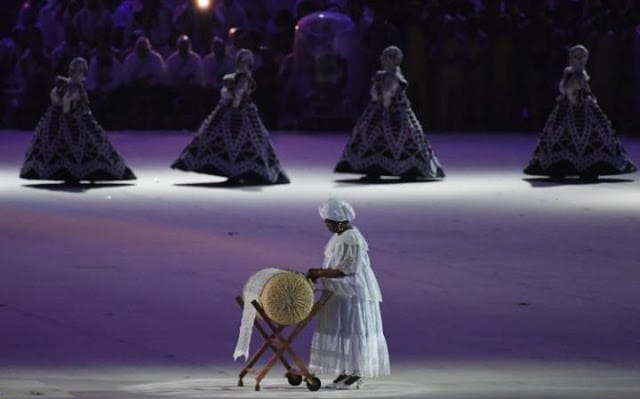 The singer in white was one of the highlights of the lace-making segment. AFP

Meanwhile, Zoll pointed out another aspect of the Bahia culture being displayed during the Olympics closing ceremony – the spiritual traditions associated with Black Brazil. “The woman in white specifically represented a Mae-de-Santo, a high priestess within several Afro-Brazilian religions, such as Candomblé,” she wrote.

Candomblé is one of three religions that grew out of the beliefs enslaved Yorubas carried to Brazil during the transatlantic slave trade. There, these beliefs and rituals were blended with elements of Catholicism, similar to Santería in Cuba. Like capoeira and the berimbau, Afro-Brazilian religions are one of many evidences of the African origins of Black and Brown people in the Western Hemisphere.

After being heavily discriminated against, some report that the spiritual traditions are now being more tolerated as a part of the national heritage and identity, while others report that religious intolerance is actually increasing against adherents of Afro-Brazilian religions.

While most coverage of the Olympics closing ceremony did not acknowledge the roots of the lacemaking tribute, Black Twitter was watching – and commenting – as usual.

That was gorgeous display of the enslaved African women’s lace work. #ClosingCeremony

Let’s hope that our eyes will continue to include Afro-Brazilians in our Pan-African world view long after the sports highlights have ceased to roll. 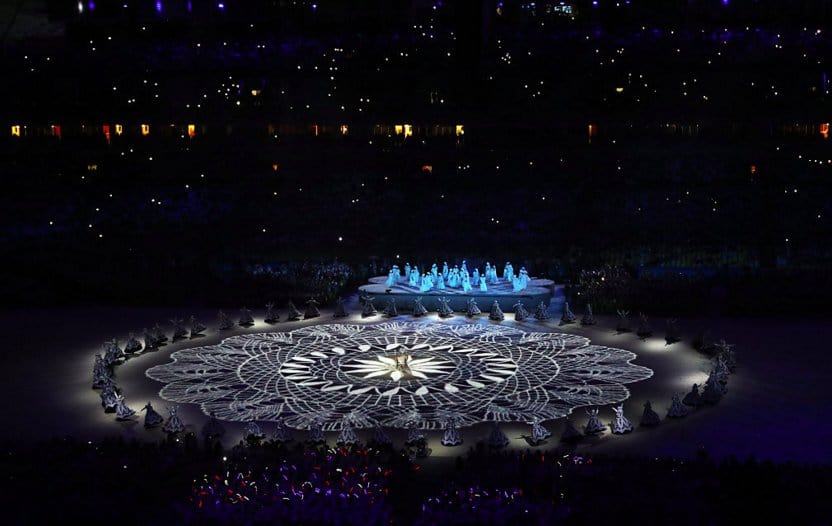 A wide-angle view of the geometric lace patterns beamed along the stadium floor. Twitter