Dancehall artist Shaggy along with Wyclef and other Reggae superstars held a benefit concert on January 6 to raise funds for the Bustamante Hospital for Children in Kingston, Jamaica.

The concert dubbed Shaggy and Friends is the event that The Shaggy Make A Difference Foundation (SMADF) and the artist himself organize every year to reach their goal of enriching Jamaica with various donations. Some of the stars that graced the stage for the cause this year were: Sting, Fetty Wap, Bunji Garlin, Fay-Ann Lyons, Christopher Martin, and Wayne Wonder to name a few. 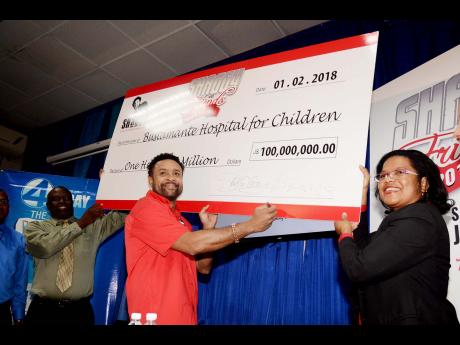 International recording artiste Orville ‘Shaggy’ Burrell (centre) signs a cheque for $100 million as Drs Brian James and Michelle Ann Richards Dawson of the Bustamante Hospital for Children look on at a handover ceremony held yesterday at the hospital in Kingston…photo credit: Shorn Hector

This year’s proceeds went to the upkeep of Bustamante hospital to ensure that it has the pertinent equipment, space, and maintenance to run efficiently.   The Gleaner reported as Shaggy was seen handing over proceeds to hospital administrators.

The Bustamante Hospital received a major makeover in 2016 when 450 pieces of medical equipment were given to the hospital.

Shaggy is a Jamaican dancehall artist and DJ best known for his hits “It Wasn’t Me”, “Angel”, and “Boombastic.” Wyclef Jean is the Haitian Grammy Award winning rapper, producer, and actor known for being one-third of famed rap group The Fugees.  As a solo artist, Jean produced masterpieces such as “911” and “We Trying to Stay Alive.” Jean is currently on a U.S. tour.