Systemic Lupus Erythematosis, most commonly referred to as lupus, is a severe, life-threatening autoimmune disorder. Many notable musicians have been diagnosed with this illness, including the late Michael Jackson and Seal.

While there are a few tale-tale signs, people diagnosed with SLE can present with a wide array of different signs and symptoms that also vary in severity. The disease is more common in women of African descent and of childbearing age. These women are also more likely to experience the more severe manifestations of SLE, like renal nephritis. 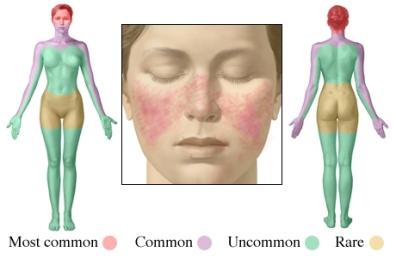 This is exactly what happens in SLE. The immune system of a patient with SLE attacks tissue and cells in various areas of the body; most often the joints, kidneys, skin, blood vessels, liver and nervous system.

SLE can be caused by a number of factors, including genetics, environmental stressors that exacerbate the disease and drugs like procainamide, used to treat cardiac arrhythmias and hydralazine, used to treat hypertension.

The signs and symptoms of SLE can be vague and numerous, however there are some that are characteristic of the disease:

There is no single diagnostic test for lupus and no cure. However recent advances in medicine have increased the 10-year survival rate for patients diagnosed with SLE to 90 percent.