Late last year, the BBC reported that historians had launched a campaign to create awareness about the Barbary pirates of North Africa. These pirates, also called the Barbary corsairs, captured hundreds of thousands of people from Britain’s coastal communities from the 16th to 19th century and sold them into slavery in North Africa, where many spent the rest of their lives.

The Barbary slave trade, which occurred at the same time as the Trans-Atlantic slave trade where black Africans were shipped off from Africa to the Americas, has been an especially contentious topic, drawing furious debate on the issues of slavery, racism, and religion.

Also called the ‘White Slavery’, the trade occurred on the Berber Coast of North Africa that encompasses present-day Morocco, Tunisia, Libya and Algeria, which were then independent states under the jurisdiction of the Ottoman Empire. The people in the region were mainly African Arabs.

While some contend that Barbary pirates were African, others, like historian Adrian Tinniswood, maintains that though some of the pirates were Barbary natives, many were European renegades who brought naval expertise to the piracy business. Some notable ones were Henry Mainwaring, Captain Jack Ward, Sinan Reis, and Dragut as well as the Barbarossa brothers, Mulai Ahmed er Raisuli, and Salih Reis, traders of Turkish descent who held the piracy and slavery business in high esteem. 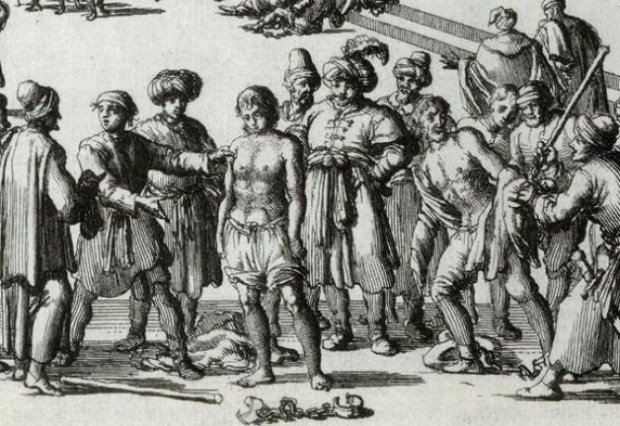 The Barbary pirates were known to have demanded tributes or ransoms from American and Swedish vessels in the Mediterranean Sea or attack European and American ships, especially in Baltimore, Ireland, and Devon and Cornwall, England. Their captives ranged from fishermen, sailors to coastal villagers and were mostly Christian and from impoverished families. But historians are careful to note that, “slaves in Barbary could be black, brown or white, Catholic, Protestant, Orthodox, Jewish or Muslim”.

The context of the Barbary slave trade was a centuries-old Christian-Muslim feud in which both sides’ behavior toward each other was pretty ghastly.  Muslims conquered, tortured, massacred and enslaved Christians; Christians conquered, tortured, massacred, and enslaved Muslims.  To the degree there was any difference, it favored the Muslims; the Muslims usually allowed Jews and Christians to keep their religion as second-class citizens, while Christians generally required Muslims to convert or die.  A considerable number of Barbary corsairs were actually renegade Englishmen, Greeks, or Italians who had converted to Islam; no such acceptance awaited Muslims who converted to Christianity, as the conversos of Spain discovered.

While some historians report that Barbary pirates took between 7000 and 9000 British men into slavery, others like Robert C. Davis, a professor of history at Ohio State University, in his book “Christian Slaves, Muslim Masters: White Slavery in the Mediterranean, the Barbary Coast and Italy, 1500-1800″, put the number at 1 and 1.25 million Europeans from 1500-1800, give or take 50 years. 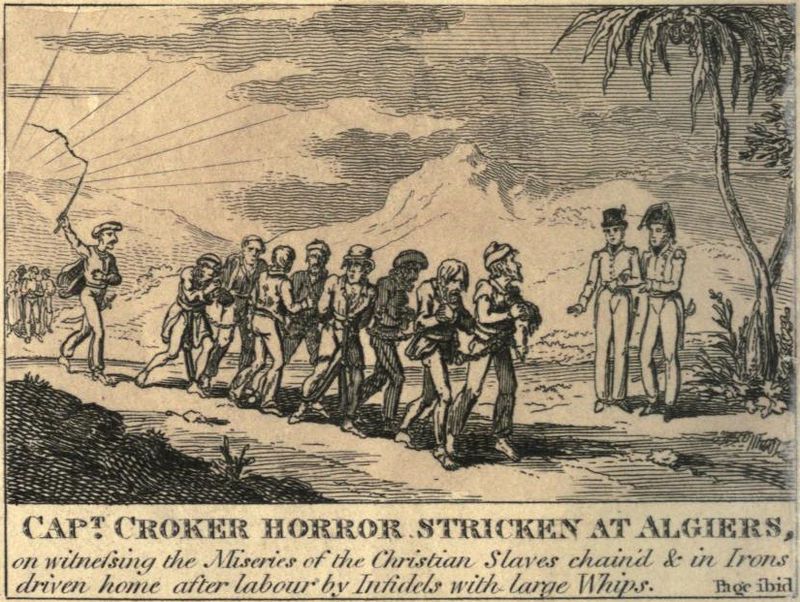 Photo caption from Technoracism: British captain witnessing the miseries of Christian slaves in Algiers, 1815. Original caption: “Captain Croker horror sricken at Algiers, on witnessing the Miseries of the Christian Slaves chain’d & in Irons driven home after labour by Infidels with large Whips.”

Additional information about the source:

“The cruelties of the Algerine pirates, shewing the present dreadful state of the English slaves, and other Europeans, at Algiers and Tunis; with the horrid barbarities inflicted on Christian mariners shipwrecked on the northwestern coast of Africa and carried into perpetual slavery. Authenticated by Mr. Jackson of Morocco, Mr. MacGill, merchant and by Capt. Walter Croker of His Majesty’s Sloop Wizard, who in last July (1815) saw some of the frightful horrors of Algerine Slavery; to rouse general attention to which, this Economical Publication is issued. With an engraving. London: printed for W.Hone, 55 Fleet-Street. 1816”.

Ancientorigins.net describes the lives of the slaves as follows:

The slaves captured by the Barbary pirates faced a grim future. Many died on the ships during the long voyage back to North Africa due to disease or lack of food and water. Those who survived were taken to slave markets where they would stand for hours while buyers inspected them before they were sold at auction.

After purchase, slaves would be put to work in various ways. Men were usually assigned to hard manual labour, such as working in quarries or heavy construction, while women were used for housework or in sexual servitude.  At night the slaves were put into prisons called ‘bagnios’ that were often hot and overcrowded. However, by far the worst fate for a Barbary slave was being assigned to man the oars of galleys. Rowers were shackled where they sat, and never allowed to leave. Sleeping, eating, defecation and urination took place at the seat. Overseers would crack the whip over the bare backs of any slaves considered not to be working hard enough.

The Barbary slave trade, which was also the scene of the Barbary Wars, only ended when Thomas Jefferson declared war on the Berber pirates after refusing to pay tributes, leading to the United States’ first foreign land military operation in that region.

On the fact that many people do not know about the Barbary slave trade, some argue that it is because of a larger liberal agenda. Edward Browning, a retired government manager shared,

Because it would complicate the thinking of liberals who set the agenda for European guilt. In the first half of the 1600s, pirates from the Barbary Coast of North Africa, authorised by their governments to attack Christian shipping ranged all around Britain’s shores. They grabbed ships and sailors and sold the sailors into slavery. Admiralty records show that during this time they plundered British shipping pretty much at will, taking at least 466 vessels between 1609 and 1616, and 27 more from near Plymouth in 1625.