Ugandans are up in arms with hospitality company, Serene Suites and Hotel following a job advert in which they limited top managerial jobs for specific racial groups. The Mutundwe based hotel in the job advert indicated that they preferred a white Hotel Manager and an Indian Restaurant Manager. 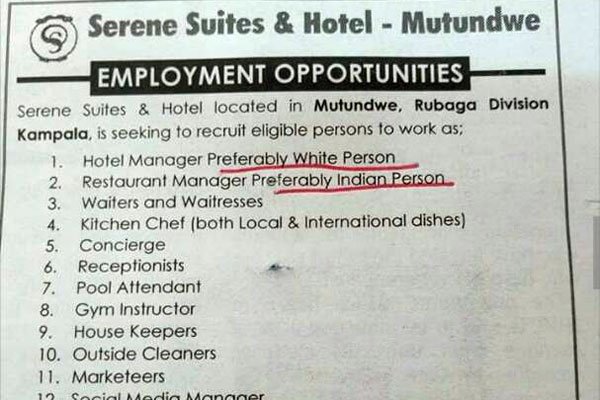 The job advert which appeared in a local daily — Daily Monitor

People have since branded the advert as racist and unacceptable, prompting the country’s Equal Opportunities Commission to question the managers of the facility.

“You are hereby ordered to make a written explanation as to why your hotel seeks to recruit for the mentioned positions taking into account the prospective applicant’s race and origin. The written explanation must reach the commission by close of business on Thursday, February 15, 2018,” the Secretary to the Commission Mujuni Lawrence stated in a letter cited by the Daily Monitor.

The Commission further directed the management of the hotel to halt the recruitment process. In a response, the hotel said the job advert was intended to recruit a talent with expert experience and international exposure.

“The management’s intent was never to discriminate or offend the public but rather to recruit a talent with expert experience and international exposure to train and upscale local staff in the current competitive leisure and hospitality market,” they explained.

But Ugandans are not enthused with the explanation. Here is how they reacted on Twitter:

I’m personally disappointed by conduct of Mgt at Serene suits, and that’s the problem of businesses owned by blacks with limited understanding of the world ,feeling inferior on account of the skin color. https://t.co/KPUdXBeb5F

Serene Suits & Hotel was just open to what is done in the dark among many agencies..#Racism#Tribalism#Nepotism

Its ashame upon Serene suits, so they r ready to recruit a “white” with a college diploma from a abroad and leave out on locals that have got better knowledge. https://t.co/Aq9nRUVAM0

Who is the proprietor of Serene Suits…this inferiority complex is at another level… pic.twitter.com/kLlDjGBJIU

You guys ain’t awake ?? @capitalfmuganda @gaetanokagwa @LuckyMbabazi . Good morning, have a great day. Did you notice the discrimination serene suits hotel exhibited in an advert yesterday?, you oughta talk about it as it made rounds yesterday.

I think serene suits should also add a section for prefered clientele to be white and demarcate their hotel as a “white people only facility”… that would be a unique selling point given their racist job preferences…. pic.twitter.com/HMD578qGZJ

I think Serene suits should start with hiring an experienced communications person.
This statement is another layer to the trouble they are in.
It’s not correct to assume a highly skilled hotelier with international experience can not be black let alone Ugandan.

A similar incident happened in the country three years ago, when a private citizen Kenneth Kaggwa dragged Shell and Bolton International Ltd, a hospitality and construction firm, to the Constitutional court over a similar job advert that literally barred Ugandans from applying.

In his petition filed on November 7, Kaggwa said the advert that the company ran in a local newspaper was discriminative against Ugandans.

Article 21 of the constitution of Uganda prohibits discrimination based on race, colour or ethnic origin, with section 6 of the Employment Act specifically prohibiting discrimination in employment.