The United Nations food agency recently called for $69.8 million in additional funding to prevent a full-blown food and nutrition crisis from unfolding in Africa's Sahel region. 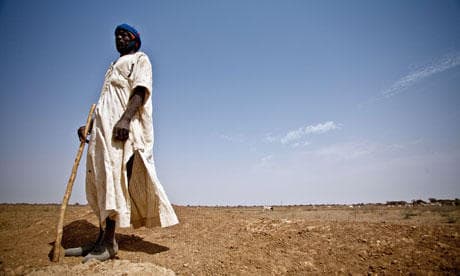 In a news release, the Food and Agriculture Organization (FAO) said that at least 15 million people are estimated to be at risk of food insecurity in countries in the Sahel, including 5.4 million people in Niger, three million in Mali, 1.7 million in Burkina Faso and 3.6 million in Chad, as well as hundreds of thousands in Senegal, the Gambia, and Mauritania.

"We need to act to prevent further deterioration of the food security situation and to avoid a full-scale food and nutrition crisis," FAO's Director-General, José Graziano da Silva, said. "Part of the solution is to improve the access of farmers and herders to local markets, encourage the use of local products, and apply risk-reduction good practices to reinforce their resilience."

According to FAO, some 790,000 farming and herding households in Sahel have been affected by droughts, sharp declines in cereal production and high grain prices, environmental degradation, and displacement, among other factors.

The total cereal production in the Sahel last year was, on average, 25 percent lower than in 2010, but as much as 50 percent lower in Chad and Mauritania, FAO reported. There were also increases in the number of displaced persons in the region, including a total of 63,000 internally displaced persons in Mali who fled from conflict in the country's north, and more than 60,000 Malian refugees in neighbouring countries.

FAO's strategy to address the issue will include providing food, agricultural items such as fertilizers and pesticides, and training to those who need it the most. It will also implement measures that protect the livelihoods of farmers and herders, such as helping them with the delivery of food crops and vegetable seeds for the planting season and supporting early-warning systems that allow them to better prepare for droughts.

"If we are to avoid yet another disaster, the humanitarian and livelihoods responses must be funded and applied on a scale that ensures protection of all vulnerable communities before they are forced to shed their assets," Mr. Graziano da Silva said, stressing that regional and local leadership will be crucial for success.

Since 2010, $25.4 million has been allocated through FAO to the Sahel. An additional $75.4 million are required to support vulnerable households, but only $5.6 million have been mobilized leaving a funding gap of $69.8 million.