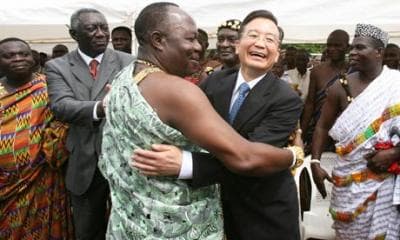 For centuries, Africa was considered a dark interlude between the grandeur of Europe and the emerging markets of Asia and often associated with corruption, war, and injustice. However, to the Chinese, Africa is the secret ingredient in their recipe for rapid economic growth.

SEE ALSO: Malians Save Hundreds of Thousands of Ancient Timbuktu Manuscripts in the Face of Terrorists

The United States Congress House Committee on Foreign Affairs must take lessons from the Chinese economic emergence in Africa or risk the political and economic demise of the United States in the continent.

The impact of these ramifications will affect average Americans because gas price will increase as a result of less imports from resource-rich African countries, such as Nigeria that accounts for 5 percent of U.S daily imports (EIA, 2012).

Unemployment rates may also increase if African countries decide to import more goods from China, thus displacing the last frontier of American manufacturing in swing states, such as Iowa, Michigan, and Ohio.

The nineties saw rapid advancements in trade relations, which were further facilitated by the Forum on China-African Cooperation (FOCAC).

According to the official website, FOCAC serves as “a platform established by China and friendly African countries for collective consultation, dialogue, equality, effectiveness, mutual benefit, and common development” (FOCAC, 2009).

By contrast, in the first quarter of 2013, the United States’ total trade (exports and imports) with sub-Saharan Africa only reached $16.47 billion, a decrease of 24 percent compared to the same period in 2012 (International Trade Administration, 2013).

Evidently, trade relations between the African continent and the United States are weakened.

Partisan politics in Congress contributes to America’s demise in Africa, because Congress has failed to pass comprehensive economic legislation since the African Growth Opportunity Act (AGOA) led by the Clinton administration in 2000.

The Chinese economic engagement in Africa brings forth a unique opportunity for the United States to learn how to participate in the growing trade opportunities eminent in Africa and not perpetuate the conventional wisdom of Africa as a poster child of aid and poverty.

The United States must balance aid and business relations with Africa because it’s losing to China on both sides of the spectrum.

Even though U. S. President Barack Obama’s recent visits led to more than $100 million in additional funding for African countries, China’s development assistance averaged more than $30 billion annually during the past half-decade (Mailafia, 2013).

To regain America’s competitive advantage in Africa, the U.S Congress House Committee on Foreign Affairs must help highlight the importance of Africa to the United States.

The President in partnership with the committee must introduce solution-oriented policies based on solid business partnerships and long-term- oriented relationships with African countries.

The perception of a mutual investor should be portrayed and put into practice to earn the trust of African countries.

The amount of aid allocated to Africa should be reduced and diversified into FDI, zero-interest loans, infrastructural development, agriculture, and education.

Africa’s growth is still at a stage of infancy; hence, policies put in place should be of long- term focus.

In order to instill a long-term solution, U.S policy must find ways to help the citizens of African countries develop their own self-sustaining industries.

Implicit here is a warning: if Congress refuses to pass legislation based on these lessons of the Chinese emergence in Africa, the United States may eventually relinquish its world dominance to China.