A group of U.S. army veterans has settled in a remote village in northern South Africa where they have found peace in protecting wildlife, especially rhinos, from poachers.

Headed by 32-year-old Ryan Tate, a former U.S. Marine soldier, the group, which is called Veterans Empowered to Protect African Wildlife (VETPAW), uses a private reserve in the northern part of South Africa for its operations.

In a recent interview with the Guardian, Tate said their mission is to keep rhinos and the rest of the game in the bush around their remote base alive. He added that all members of the group have been involved in combat, often with elite military units, in places like Iraq, Afghanistan, and elsewhere.

“We are here for free. We are not going anywhere. Whether it is cold or hot, day or night…we want to work with anyone who needs help,” said Tate.

The skills and experience these soldiers have acquired from successful deployments in conflict zones for close to 15 years qualify them to be involved in the war against poaching in the region, according to Tate.

Service to the Endangered

The idea to establish VETPAW came a few years after Tate enlisted in the U.S. Marine Corp in 2001 following the horrific 9/11 terror attack. He says he was touched by a documentary about illegal poaching and deaths of park rangers in Africa.

So he decided to put together a team of U.S. veterans, with whom he had served in the military, to train and support park rangers in Africa.

“When I returned to civilian life after the Marine Corp, I lost myself. I didn’t really know what I was here for,” Tate writes on the group’s website.

“Learning about the brutality of the poaching crisis and the rangers who are dying protecting wildlife, hit me harder than anything I’d ever seen – and I’ve seen some crazy stuff. I realized I have the skills necessary to help save animals and the people who risk their lives.”

Currently, his team is working on a dozen private game reserves, covering a total of close to 200,000 hectares in Limpopo, South Africa’s northernmost province. 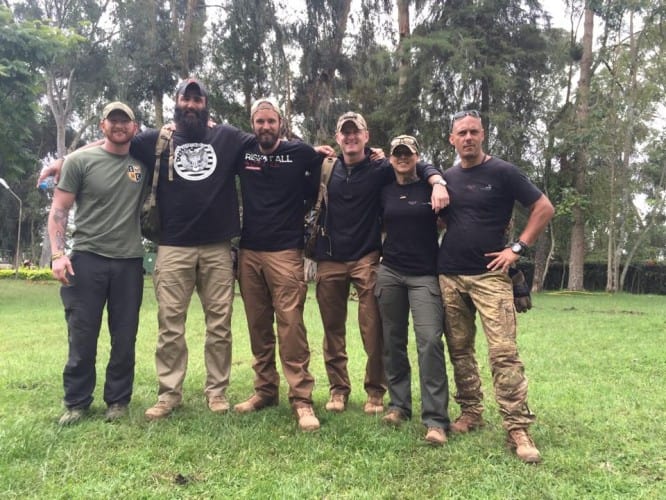 South Africa is home to 70 percent of the world’s 29,500 rhinos, which are now facing serious threat from increased trade in illegal rhino horns.

According to the National Geographic, at least 1,054 rhinos were killed by poachers last year in South Africa, a massive increase from the mere 13 killed in 2007.

Apart from protecting wildlife, the veterans are creating jobs in the region by training and supporting local game rangers. They have also helped in reducing cases of break-ins and other forms of crime in the area.

Tate also insists that the program has helped to combat veteran issues in the U.S., where most former servicemen suffer high levels of unemployment and mental illness.