Spanish travelers aboard a Vueling flight headed to Dakar, Senegal, from Barcelona caused a stir at El Prait airport on Saturday, after they attempted to prevent the deportation of a Senegalese migrant by Spanish authorities.

The Barcelona-Dakar flight had to be delayed for 2.5 hours as authorities at the airport tried to control the passengers who staged a sympathy protest inside the budget airline jet, according to the BBC.

The plane was finally allowed to take off with the male Senegalese migrant on board, after the police detained 11 passengers identified as protesters.

The group now reportedly face a fine of up to 225,000 euros each for endangering flight safety.

According to eyewitnesses, the sympathy protest started inside the plane when the handcuffed Senegalese migrant — escorted by two border guards — complained loudly about his deportation: 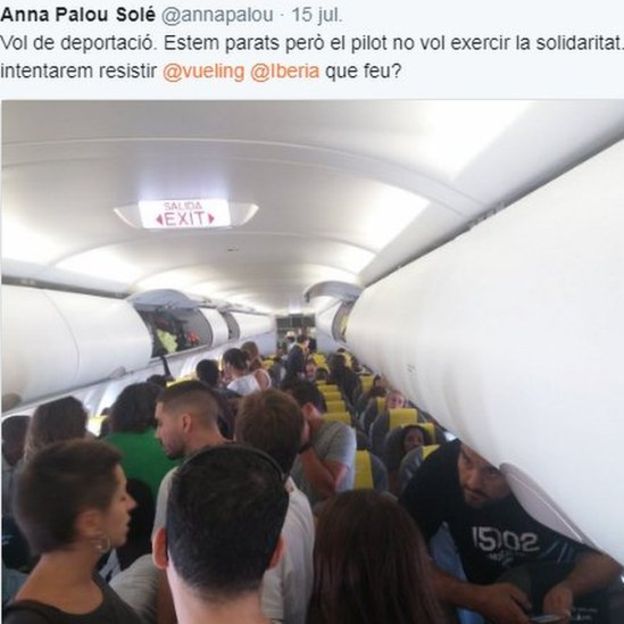 Images tweeted by a Spanish journalist showed passengers, most of them Whites, blocking the aisle.

We have succeeded! Flight of deportation stopped. Now the authorities are coming to take the person away! Solidarity is our best weapon! one of the image captions read.

The delay also affected a return flight from Dakar, which was postponed to Sunday, forcing the airline to pay for the overnight accommodation of 176 passengers.

The incident sparked another anti-deportation protest at Seville airport in southern Spain on Sunday, organized by a group calling itself “Caravana Abriendo Fronteras” (Open Borders Caravan).

In recent years, the number of illegal African migrants reaching Europe through the Central Mediterranean route has reached worrying levels, forcing European governments to come up with a series of measures to curb the trend.

Unfortunately, most of these migrants are usually driven by poverty, repression, and the lack of employment opportunities in their home countries.

Many of them have died while trying to cross the Mediterranean Sea using inflatable and creaky boats, while others have ended up in detention centers in Libya, where they are abused and sold as slaves.

But even those who are lucky to reach Europe end up in refugee camps — where they remain for months waiting to be processed — are eventually deported.