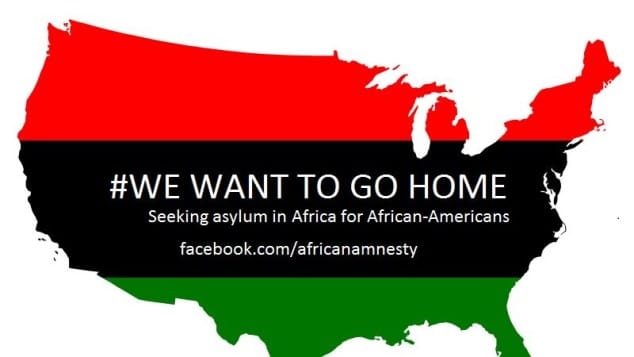 In response to the number of African Americans losing their lives to White police officers in the United States, a new Change.org petition started by a Brenda Pearson of Mclean, Va., calls on African governments to “give asylum to African Americans.”

The harrowing murders prompted Pearson to start the hashtag #WeWantToGoHome and write the following in her petition:

African Americans – the descendants of Africans stolen from the continent more than 400 years ago – are experiencing what can only be called neoslavery on the land that our ancestors were forced to build. We experience daily, relentless attacks by the police, suffer high rates of incarceration due largely to discriminatory laws and sentencing, not to mention economic, health, and employment disparities for no other reason than being Black in America. One can only turn on the news to see the treatment that we are receiving in the United States, and it is only getting worse.

We are writing to request that any and all African nations consider granting us asylum within your borders.

We understand that Africa is a continent with vast and dynamic cultural tapestries and thus there is no one-size-fits-all place where we can return. We are simply asking that we have the opportunity to return to the birthplace of our ancestors in order to try to rebuild and heal from our trauma. In return, we will bring all of the talents, skill, and richness that we have given to America in order to help make your nations great while still preserving your cultural identities.

We are ready to return home. We hope you will accept us.

Africans dispersed throughout the diaspora have been putting out a clarion call to return back to Africa since the Trans-Atlantic Slave Trade.

Fellow citizens of Africa, I greet you in the name of the Universal Negro Improvement Association and African Communities League of the World. You may ask, “what organization is that?”
It is for me to inform you that the Universal Negro Improvement Association is an organization that seeks to unite, into one solid body, the four hundred million Negroes in the world.

As you are aware, the world in which we live today is divided into separate race groups and distinct nationalities. Each race and each nationality is endeavoring to work out its own destiny, to the exclusion of other races and other nationalities. We hear the cry of “England for the Englishman,” of “France for the Frenchman,” of “Germany for the German,” of “Ireland for the Irish,” of “Palestine for the Jew,” of “Japan for the Japanese,” of “China for the Chinese.”

We, of the Universal Negro Improvement Association, are raising the cry of “Africa for the Africans,” those at home and those abroad.
There are 400 million Africans in the world who have Negro blood coursing through their veins, and we believe that the time has come to unite these 400 million people toward the one common purpose of bettering their condition.

The great problem of the Negro for the last 500 years has been that of disunity. No one or no organization ever succeeded in uniting the Negro race.

But within the last four years, the Universal Negro Improvement Association has worked wonders. It is bringing together in one fold four million organized Negroes who are scattered in all parts of the world.

Here in the 48 States of the American Union, all the West Indies islands, and the countries of South and Central America and Africa. These four million people are working to convert the rest of the four hundred million that are all over the world, and it is for this purpose, that we are asking you to join our land and to do the best you can to help us to bring about an emancipated race.

If anything stateworthy is to be done, it must be done through unity, and it is for that reason that the Universal Negro Improvement Association calls upon every Negro in the United States to rally to this standard. We want to unite the Negro race in this country. We want every Negro to work for one common object, that of building a nation of his own on the great continent of Africa.

That all Negroes all over the world are working for the establishment of a government in Africa, means that it will be realized in another few years. We want the moral and financial support of every Negro to make this dream a possibility. Our race, this organization, has established itself in Nigeria, West Africa, and it endeavors to do all possible to develop that Negro country to become a great industrial and commercial commonwealth.

We want to build up cities, nations, governments, industries of our own in Africa, so that we will be able to have a chance to rise from the lowest to the highest position in the African Commonwealth.

More recently in 2014, Ghanaian mayor Kwame“Osagyefo Dr” Appiah Boateng or “Kwame Mayor” called for airlifting millions of African Americans, Afro Caribbeans and others in the diaspora back to Africa at the end of America’s Black History Month in 2015.

At press time, there are no updates on how that program fared.