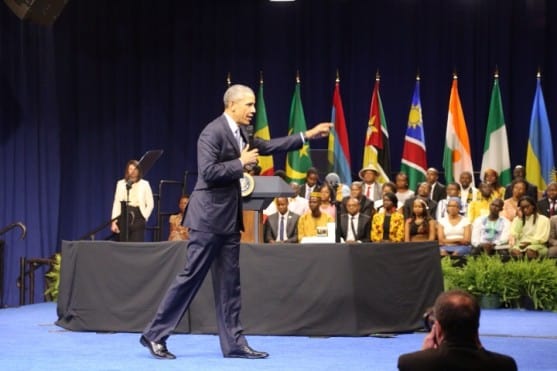 RELATED: Obama to African Union: ‘Nobody Should Be President for Life 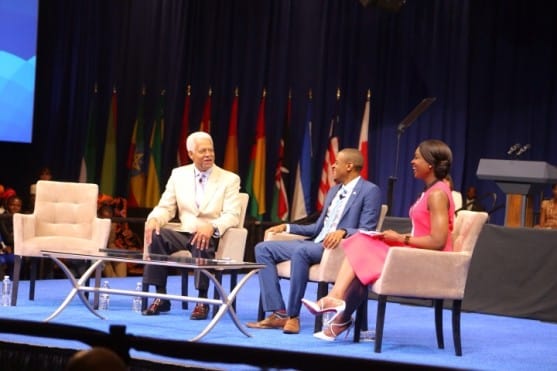 While last year’s YALI event featured a host of speakers, including First Lady Michelle Obama, this year began with a panel discussion moderated by Nigerian-American journalist Lola Ogunnaike (pictured in dress), who volleyed questions back and forth between Mandela fellow and South African Hlaganani Gumbi (pictured center) and Georgia Congressman Hank Johnson (pictured).

Gumbi also referenced the fact that many Americans fail to travel, which likely contributes to a general ignorance about the continent.

Congressman Johnson spoke to this issue saying, “Forty percent or perhaps higher of the members of Congress do not have passports, and so they don’t travel.

“And so, if the leaders don’t travel, that says something about the leaders who are leading.”

Following Johnson’s remarks, Ogunnaike asked whether one would say that there is a “negative perception” of being a world citizen in the United States, and Johnson concurred, explaining, “There’s an element in America, that it is all about America,” Johnson added, “and the rest of the world has to get in line behind America. And that perception has to change.”

Ultimately, Johnson remarked, though, that Africa is responsible for its own image.

In addition to attending the three-day summit, which ends Wednesday, Mandela fellows were previously stationed at a university for six weeks. 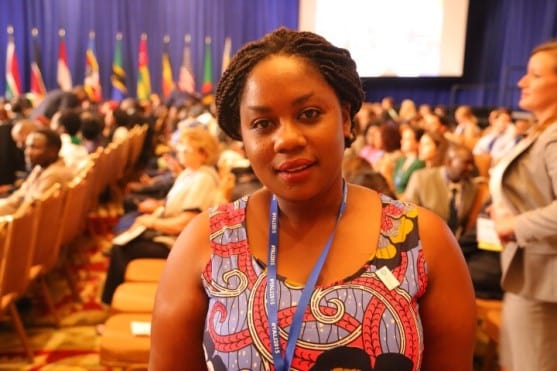 Thirty-four-year-old Emily Kaakyo Rubooga (pictured) of Uganda, who performs program development for an NGO, says of her time at Arizona State University, “I’ve enjoyed the spirit of comradeship — being able to learn from others. We’ve been able to exchange ideas and learn from others. But also, I’m taking back a strong network both personally and professionally.” 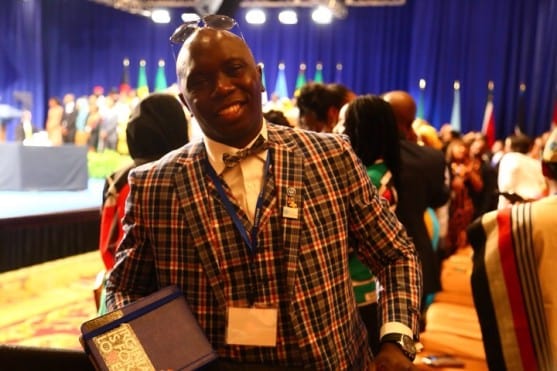 And Hlayisani Nkhawashu (pictured), 32, of Limpopo, South Africa, agrees, “I’m taking the connections. Now I belong to a community. Any problem that I face in the community, I’ll be able to address it [with all that I’ve learned].”

Nkhawashu uses arts, dance, and culture to provide solutions to youth unemployment and tackles issues, such as HIV, alcohol and substance abuse, and teenage pregnancy. 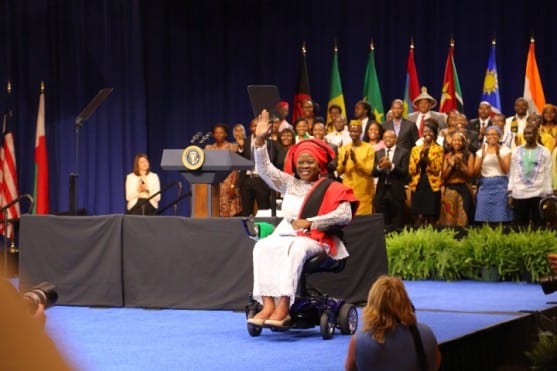 Before President Obama took to the stage, Grace Alache Jerry (pictured), who had her peers on her feet with both her story and her fearlessness, received a rousing reception from the audience.

“I am a Nigerian, a musical artist, and a disability rights activist. I was involved in a car accident 13 years ago, and it almost claimed my life. It was difficult getting my life back…but I’m here before you and I am strong.” 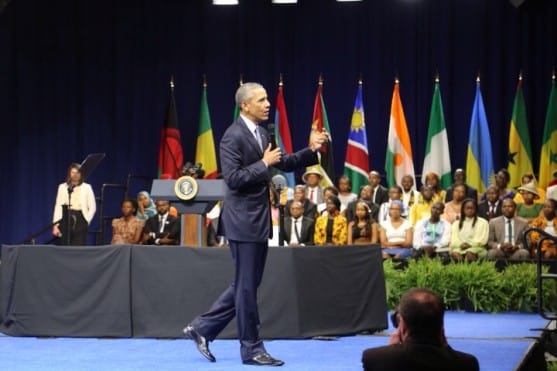 While making a number of key announcements, President Obama reminded YALI recipients about the purpose of the summit, “So as your time in America comes to a close, I want you to remember this is really just the beginning. We just started this. And the truth is that our greatest challenges — whether it’s inclusive development, or confronting terrorism, dealing with conflict, climate change, increasing women’s rights, children’s rights — these are bigger than any one nation or even one continent.

“Our hope is that 10, 15, 20 years from now, when you’ve all gone on to be ministers in government, or leaders in business, or pioneers of social change, that you’ll still be connecting with each other, that you’ll still be learning from each other, and that together, you’ll be reaching back and helping the next generation — that you’ll not only be making a difference in your own countries, but you’ll be the foundation of a new generation of global leadership, a generation that’s going to be working together across borders to make the world safer and more prosperous and more peaceful and more just [place]. That’s my hope for you.

“We’ve brought you here because we benefit from your leadership, but we’re counting on you to work together to make sure that you’re also reaching back to those who are going to be coming behind you. Couldn’t be prouder of you.” 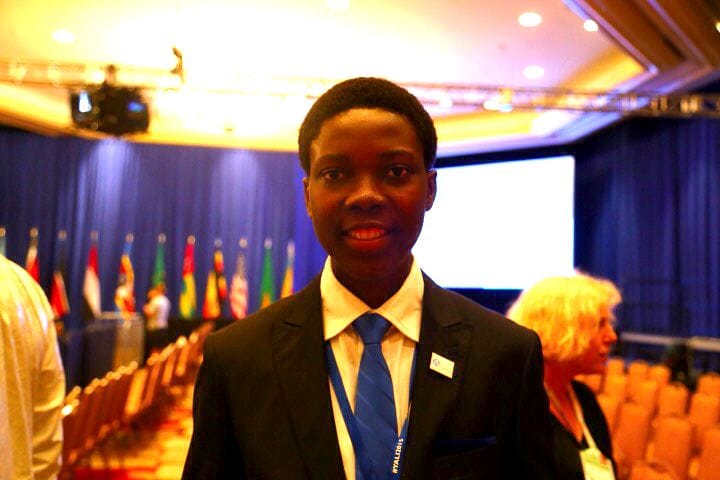 Afterward, the President took a number of questions from YALI attendees. One of the most thought-provoking exchanges involved 27-year-old Program Manager Olusola Owonikoko (pictured) who asked President Obama what his country was willing to do about the brain drain, where the brightest minds of Africa are flocking to the West in detriment to their respective countries.

To which President Obama responded, “The issue is not just that we’re a wealthier country.  I think it’s fair to say — and you know better than I do — but part of it has to do with a young person’s assessment of can I succeed in applying my talents if, for example, the economy is still built on corruption so that I have to pay a bribe or be well-connected in order to start my business.

“Or are there still ethnic rivalries in the country, which means that if I’m from the wrong tribe, I’m less likely to advance.  Or is there still so much sexism in the country that if I’m a woman, then I’m expected just to be at home and be quiet, when I’m a trained doctor.  Or is there a lack of rule of law or basic human rights and freedoms that make me feel as if I am restricted in what I can do.

“I think a lot of young Africans would be much more interested in staying even if they don’t have as big of a house, or the shopping malls aren’t as big, or — if they felt as if the basics are taken care of, I can keep my family safe, I can practice my profession, I’m not going to be discriminated against — (applause) — the government is well-meaning and well-intentioned and is not corrupt, and public investments are being made, then people I think would have a sense of meaning in their lives.”

Afterward, Owonikoko told Face2Face Africa that he appreciated President Obama’s response, “I think it was a very, very good response, because the truth is that it is both sides, in my opinion. Everybody wants to move to where they think the grass is greener.

“Even during my short stay in the United States, I’ve realized that the grass isn’t as green as you think. The truth is so many young people who migrate to this country find out that this country is not what they expect.

“Because walking on the streets of New York, I saw people begging to the point that I took some of my food to give to the homeless, so it’s not always as it appears to be. I really think at the policy level, at government level, we should begin to think about how we can begin to control some of these things so that we can ensure that the best brains are where they are supposed to be.”

While the YALI summit is indeed a young program like its recipients — since its beginnings in 2010 — President Obama made a number of announcements solidifying the fellowship in to the future.

In addition to opening the first YALI Regional Center in Nairobi, Kenya, during the President’s trip last month, a center opened in Accra, Ghana, on Monday to coincide with this week’s summit.

And while YALI participation will be extended from 500 to 1,000 recipients next year, President Obama’s program will also select about 80 American youth to take part in a “reverse exchange” program next summer.

The American fellows will correspond with YALI alumni throughout the continent.

An additional feature of the YALI summit is the rolling out of Mandela Washington Fellowship Institute Courses, which will be accessed online and will serve more than 140,000 members of the YALI network.

Therefore, past and future YALI participants can look forward to greater connectivity, capacity building, and resource sharing with each other and across communities.