These are the thoughts & reflections of a Nigerian who grew up in the United States and is currently living in Nigeria.

It was a breezy early evening as I sat outside a friend’s house cutting a pineapple and waiting for NEPA to put back on the light. My friend’s father was going on about U.S. politics, and as his children tried to tune him out, I picked up on his topic of the Women’s March that was going on in Washington, D.C., and almost every major city in the United States.

I saw a few mentions of the March on my timeline as friends posted pictures of their preparation, but I had no idea of the scope and organization behind the event. Regardless, I understood the sentiments, emotions, and purpose behind the march.

It was an understanding that I had to quickly explain to others around me, even though I was just developing it myself. So there I was, a million miles away from Washington, D.C., staunchly defending a protest I was just learning about.

I heard criticism and questions about the Women’s March: “They haven’t even given him a chance yet.” “Who took away their rights?” “They should be patient.” “What are they making noise about?” “Did he say he hates all those people?” “Is he a king.” Will he be able to carry out all those things on his own?”

I found myself trying to explain why people would choose to march on Day 1 of Trump’s presidency. The Women’s March is more than just about him as a person; it’s about the ideologies he has brought front and center. It’s not about trying to overthrow Trump, it’s about making their voices heard. It’s about telling Trump and his administration that all the people he insulted throughout his campaign are also humans that deserve rights and protections in a “great” America. Should they wait until he takes away their rights before they say something?

No, Trump can’t do it alone, but Washington is filled with people who agree with him and think like him. Those people also need to know that Americans won’t stand for that. Are they just supposed to pretend all the hate he has been spewing for the past year and a half is a joke and assume he won’t follow through on those promises? Why should they even wait for that reality? 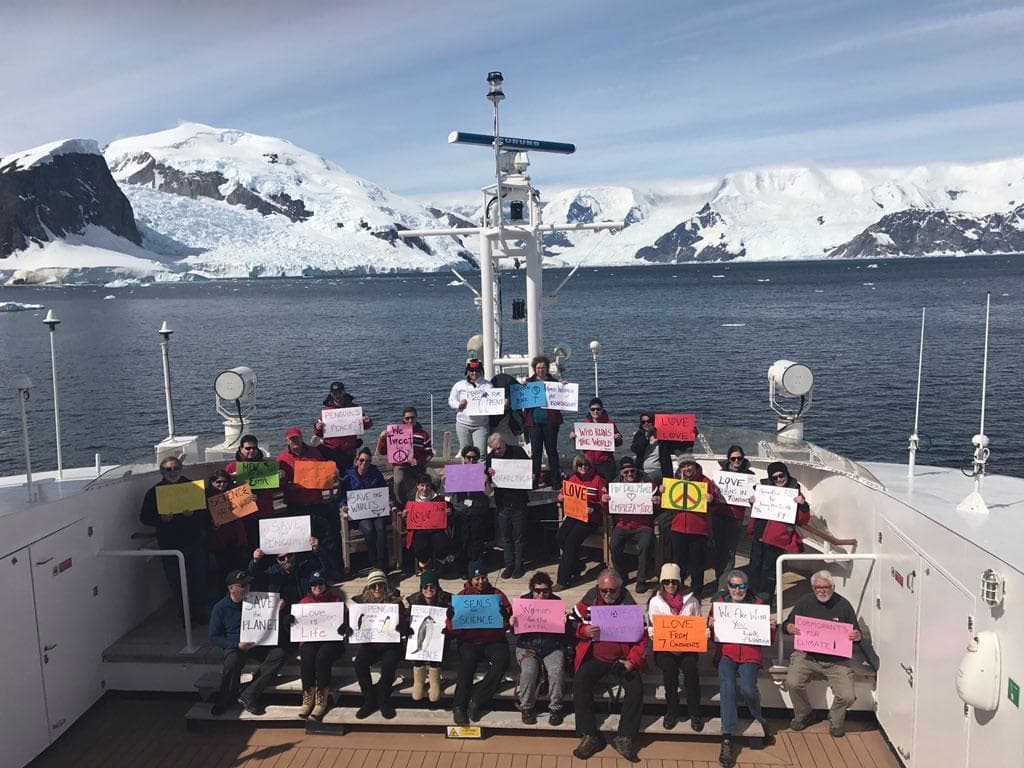 People were protesting and showing solidarity with the Women’s March from around the world, including Antarctica.

As I tried to make my points, night fell, and there was still no lights. We turned on the generator and tuned the TV to CNN. Sure enough, images of marches from across the United States filled the screen: a sea of women and protesters as far as the eye could see in cities, such as Seattle, Denver, Boston, New York, and of course D.C. Protests were even held internationally in London, South Africa, Paris, Sydney, and many other cities.

I watched as Alicia Keys lead the D.C. crowd in reciting parts of her hit song, “Girl on Fire,” before her and her band broke out into a heartfelt song. Janelle Monae and members of her creative group Wondaland were on stage with Mothers that had lost their children to police brutality. They had the crowd repeating the victims’ names along with a live rendition of “Hell You Talmbout.”

It was an incredible show of activism and solidarity by people genuinely concerned for their rights and those of the people around them.

But my friends weren’t buying it.

I had to explain further. This wasn’t an anti-Trump protest; it was a pro-love march. A reminder to all those in power that WE exist, WE matter. This WE being all the groups and people that Trump has insulted, marginalized, and threatened over the course of his campaign. It was a march of solidarity. A reminder that America is only great because of its diversity. Nothing short of that acknowledgement can make America great.

While it was true that many had gone to the March to express their disapproval of Trump, he was not the central focus of the March. You can’t use the sentiments of a few to discredit the value of the whole crowd.

We argued back and forth about whether this was similar to the March on Washington lead by Dr. Martin Luther King Jr. After all, people also told MLK to be patient and to not disturb the peace.

“OK, great but what exactly do they want Trump to do.”

People were marching for various reasons as evidenced by the #WhyIMarch hashtag, but it all boils down to not allowing the establishment to forget that they are humans who equally deserve to be in America and have their rights protected by the law and freedom to live their lives the way they want.

“OK, how will the march accomplish that?”

Isn’t that the golden question in every protest? The truth is that as amazing and heartwarming as this march is, it is and should be just the beginning. We can’t afford to march (or support the march from afar or via social media) and then go home and pat ourselves on the back for a job well done.

Instead, we have to march then roll up our sleeves and get the work done just as former President Barack Obama suggested. This march should just be a beginning. There is still so much more to do, and the Women’s March organizers have some ideas for you.

I was also touched by the words of Houston blogger Dagny Zenovia, and I think her statements are words we should all reflect on:

Don’t lose sight of the bigger picture. Don’t jump on the bandwagon when it’s convenient. Are you really protesting for all concerned? … I can’t help but wonder…what happens next? Are we really ready for change? Or do we continue complaining behind a screen?

What did you think of the marches? I wonder if we would have a movement like that in Lagos; yet, we didn’t protest President Muhammadu Buhari remarked on a woman’s place.