With its annual number of international visitors expected to grow to 1.5 million by 2024, Ghana’s tourist sector remains one of the key contributors to its lower middle-income economy. Sadly, the poor maintenance of several important museums is a big concern. Not only does it cause the government and tourism-related business to lose out on potential revenue, but it also robs residents and tourists alike of valuable opportunities to learn about Ghana’s greatest heroes. One such case is in the Ashanti Region, where the Nana Yaa Asantewaa Museum has been deteriorating for more than a decade.

The museum was established at Ejisu-Juaben Municipality in the year 2000 to pay homage to the great Ashanti queen mother Nana Yaa Asantewaa. She is famous for leading battles against British intrusions on the Ashanti Kingdom’s sovereignty during the “War of the Golden Stool.” When a British government official demanded to sit upon the sacred stool, which represents the soul of the whole kingdom, she motivated the Ashanti men to defend their honor, stating:

“Now I see that some of you fear to go forward to fight for our king…in the brave days of Osei Tutu, Okomfo Anokye, and Opoku Ware, chiefs would not sit down to see their king to be taken away without firing a shot. No European could have dared speak to chiefs of Asante in the way the governor spoke to you this morning. Is it true that the bravery of Asante is no more? I cannot believe it. It cannot be! I must say this: if you, the men of Asante will not go forward, then we will. We, the women, will. I shall call upon my fellow women. We will fight! We will fight till the last of us falls in the battlefields.” 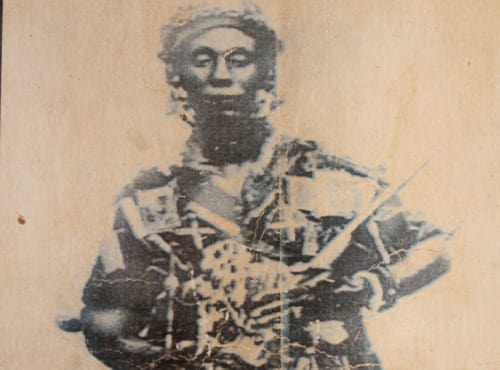 The iconic museum built in her memory “was a lively place,” remembers the museum’s former coordinator Frank Badu Sampene. “We had many people visiting here, especially foreigners.” All that changed in 2004 when the building was ravaged by a fire. Where it had once attracted close to 300 tourists a month and employed five local tour guides, business slowed and eventually collapsed.

The loss of Nana Yaa Asantewaa Museum has also had a negative toll on several hospitality businesses. Sampene Recounting its role as the backbone of brisk business in the municipality, Sampene laments, “When we started we had people moving in and some few people also trying to put their containers to sell some items here….The number was going to move on and increase and unfortunately the place got burnt and we had this u-turn.”

Even though the United Nations World Tourism Organisation (UNWTO) forecasts 3 -4 percent growth in Ghana’s tourism sector during the 2015/2016 period, projections by tourism think-tank, Tourism Research and Advocacy Centre (TRAC) shows the rating may decline by five percent by 2021. Investing in the repair and upkeep of important cultural destinations can help stabilize these figures and benefit both curious visitors and participants in the local economy.