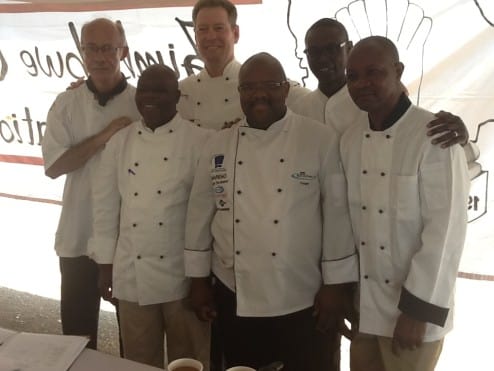 While the piano player alternates between African and Western classical rifts, such as Miriam Makeba’s “Malaika” and Billy Joel’s “Piano Bar,” I sit alone at the dining room of the Meikles, one of Harare stateliest hotels after just arriving that afternoon in Zimbabwe. I am a guest of the Zimbabwe Tourism Authority (ZTA) to serve as a judge for the country’s top chefs’ competition. 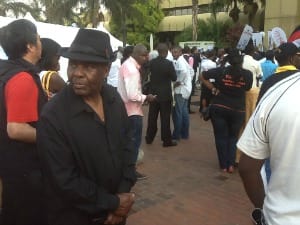 My friend Chef Chris Gonzo (pictured right in black), one of the initiators of the event, is also the executive chef of the Meikles Hotel and the head of the Zimbabwe Chefs Association. Chef Gonzo is one of the most-experienced chefs in the region. His professional cooking experience began when the country was still called “Rhodesia.”

Chef Gonzo even cooked for reggae icon Bob Marley during his visit to the legendary Zimbabwe Independence Day concert. Today, Chef Gonzo is also a part owner of a new cooking school, the Culinary Arts Academy, that aims to train budding chefs in the classics of cooking as well as in the culinary tradition of Zimbabwe.

It’s my second trip in Zimbabwe but only my first in Harare. During my previous trip, I stayed in Victoria Falls and my concept of stunning beauty was subsequently upgraded.

Needless to say, I am very excited to be here again.

Exhausted from a long trip that lasted close to 20 hours via Dubai, I opted to have my first dinner in the hotel’s restaurant. It’s a spacious dining room with huge glittering Victorian chandeliers hanging from across the ceiling and mahogany wood panels on the wall, setting a tone of faded elegance. It looked nothing like the Harare I was expecting to encounter but was a prelude to a stay that would dispel much of the preconceived ideas I’ve had about the state of affairs in this controversial country.

Unfortunately — as is often the case in too many hotels in Africa — the menu looked like one you’d expect to see in Paris or London; however, Chef Gonzo’s skills and mastery of classic fares saved the day!

My first course was a smooth Chicken Liver Parfait Brulée with subtle hints of cognac topped with a thin crust of caramelized sugar. It was followed by meltingly tender lamb shoulder, which was slowly cooked and pulled from the bone then shredded before being shaped over broad beans on a pool of tomato juice with a side of perfectly cooked cauliflowers, zucchini, and carrots.

The waiter recommended a musky and full-bodied “Crock” Pinotage from the Stellenbosch region in neighboring South Africa that superbly complimented the lamb.

Then came the dessert and cheese course served on an elegant pyramid tower of silver platters: Crème Caramel, Chocolate Éclair, Strawberry Pannacota. The cheese selection had Camembert, Stilton, and Blue Cheese that looked ripened to perfection — the usual suspects.

Sadly, I couldn’t indulge in this last course; I was too jetlagged, and frankly, I was also looking forward to the authentic local flavors. Thankfully, in the upcoming chefs’ competition, the first prerequisite was to use local Zimbabwean ingredients in a creative way.

With close to 100 chefs arriving from all around the country, the competition took place in the gardens of the Rainbow Towers Hotel, and the atmosphere was electric.

My peer judges (pictured below) came from South Africa, England, and Zimbabwe. 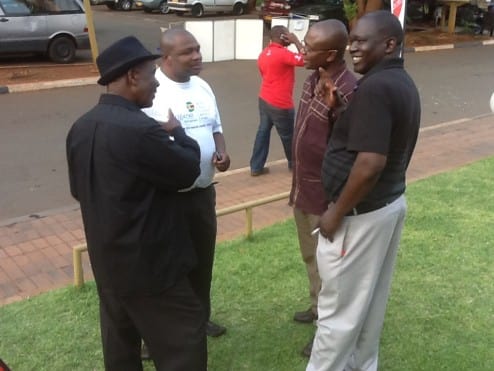 Once the details of the competition were explained, the chefs were divided into teams and categories. A DJ was blasting music and an MC walked around the stations, describing with detail the chefs’ efforts to the attentive crowd.

We tasted everything imaginable in the Zimbabwe food repertoire: crocodile stew; fried Kapenta, a tiny fish delicacy also known as the Tanganyika sardine; Braais, the famous local barbecue with goat, lamb, and local game like kudu and gazelle; Zimbabwe “popcorn” or flying ants fried or served fresh (they taste like butter); Sadza, of course, is Zimbabwe’s version of hard polenta traditionally served with peanut sauce or Chomolia, a local green that resembles kale; and Boerewors sausage.

All of these classics were revisited for an updated, fresher version.

Chef Gonzo’s excitement was palpable; his vision was unfolding right under his eyes. Hopefully, Chef Gonzo and his partners will get the needed support to get his new school off the ground. Either way, the cuisines of Zimbabwe revisited tasted like a precursor of an African Food Renaissance, and the battle had just began!

Below are recipes of my vegetarian version of peanut sauce to accompany the following Zimbabwe Sadza recipe. Also find other recipes in my book “Yolele! Recipes from the Heart of Senegal.”

3.  Bring water to a boil, reduce to a simmer and add the cornmeal mixture. Cook for approximately 5 minutes, stirring constantly.

4.  Slowly add last cup of cornmeal and stir and stir until it is very thick and doesn’t stick to sides.  Plop it onto a serving platter or bowl and make it a pretty mound.