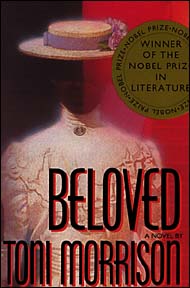 Beloved is set in post-Civil War Ohio and tells the story of Sethe, a woman of “iron eyes and backbone to match”. Sethe escapes slavery by running to Ohio. But after 28 days of freedom, slaves catchers come for her and her children under the Fugitive Slave Act of 1850 , a law which gave slave owners the right to pursue slaves across state borders. Rather than allow her daughter to be recaptured into slavery, Sethe kills her two-year-old daughter. Years later, a girl presumed to be her daughter, Beloved, returns to haunt Sethe’s home. The novel begins with an introduction to the Beloved’s ghost: “124 was spiteful. Full of a baby’s venom”.

Morrison is a literary giant! She won the Nobel Prize for literature in 1993, three years after she published Beloved. She was the first American woman to win it in 55 years and the first African American ever. The Swedish Academy said of her work, “characterized by visionary force and poetic import {that} gives life to an essential aspect of American reality.”