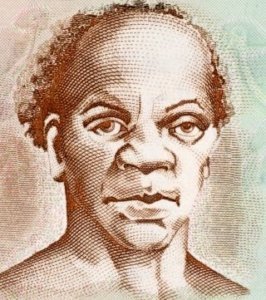 Sam Sharpe was a slave of an English attorney. At the time, the British allowed slaves to hold religious meetings.  Sharpe took advantage of the meetings and started preaching to people about the need for freedom from slavery. When the British parliament began discussing the abolition of slavery throughout the Empire in 1831, Sharpe followed it closely through several newspapers. In December 1831, Sharpe began a protest after his belief that the British parliament had granted freedom to Jamaica but the local planters had ignored it. Slaves agreed not to work and to demand freedom from their plantation masters. This led to some of the slaves marching and torching plantations, an action which was not in accordance with Sharpe’s initial plan of a non-violent resistance. Their strike action had a damaging effect as it to take place at a time when sugar cane crops ripened and were due to harvest.  Fourteen plantation masters died in the 10-day clash and over 200 slaves were left dead. Sharpe later surrendered to the military troops and accepted blame for the failed revolt. He was hanged in Montego Bay on May 23, 1832. His revolt is believed to have played a huge role in the British parliament’s deliberations over the following months that finally led to the Slavery Abolition Act.