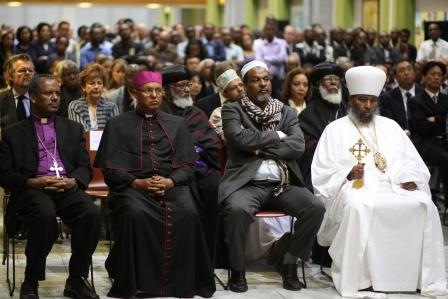 Ethiopians were reported to have offered national prayers in solidarity with the United States and for the lives of the victims of the deadly terror attack. The attack coincided with their New Year and they used the opportunity to pray for the victims.

South African president Thabo Mbeki is reported to have halted all broadcasts after the attack in solidarity with the U.S. and offered an undisclosed financial support.

Sierra Leoneans marched in the streets in a show of solidarity to the United States.

Leaders of these North African countries – Hosni Mubarak, Muammar Gaddafi and Omar al-Bashir – condemned the attacks while clerics described the attacks as “cowardly” and “un-Islamic”.

Gaddafi described the attacks as “horrifying” and urged Muslim aid groups to join international assistance efforts to the US, “regardless of political considerations or differences between America and the peoples of the world”.

“We shouldn’t jump to conclusions. My advice to the US is not to attack a country because of some small organisation. You have to find out who did it, but not punish innocent people,” advised Hosni Mubarak.

King Mohammed VI of Morocco condemned the attacks and senior government officials attended an interdenominational ceremony at the cathedral of Rabat.