In the 1950s, a Nigerian known as Mashood Adisi Ajala Olabisi got worldwide attention for his travelling adventures.

The renowned globe-trotter visited 87 countries in six years and mostly on his bicycle, but sometimes used a motor scooter.

In 1972, Olabisi also known as “Ajala Travel”, was described in many Nigerian songs as Africa’s greatest traveller, with Nigerian music legend Chief Commander Ebenezer Obey singing about his exploits.

Born in Ghana in a polygamous household, Ajala later moved to Nigeria to school and went to the US at age 18 where he started his travelling adventures in the 50s. 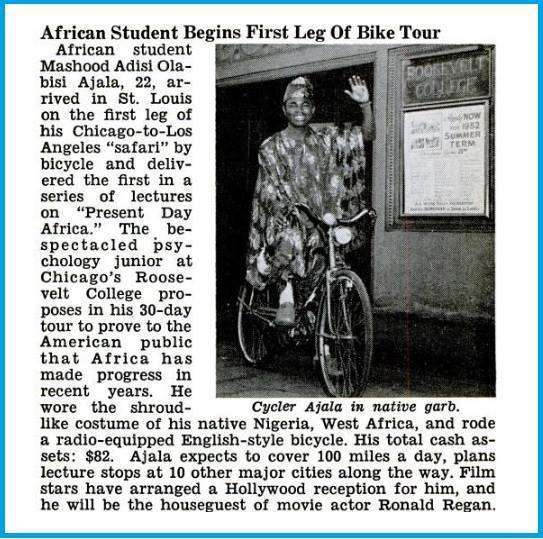 Ajala Travel began his travelling adventures in the 1950s

In 1952, he decided to embark on a cross-country tour of America with just his bicycle and agbada. He would cover 2,280 miles in 28 days starting from Chicago and ending in Los Angeles.

“From America, I went to Canada (where I spent a couple of years) and later on to Britain. In 1957 I began my one-man Odyssey around the world. It is still going on as I write this in Sydney, Australia. In nearly all the eighty-seven countries I have visited during the course of my six-year jaunt around the world (ranging from North America to Eastern and Western Europe, through Africa and Asia and as far east as Korea, Indonesia and Australia), I have observed many different political regimes both in democratic and communist states. I have met with brutality and racial intolerance. I have felt the bitter evil of man’s inhumanity to man, and have marbled at the goodness of the humane-hearted,” Ajala wrote in his book “An African Abroad.” 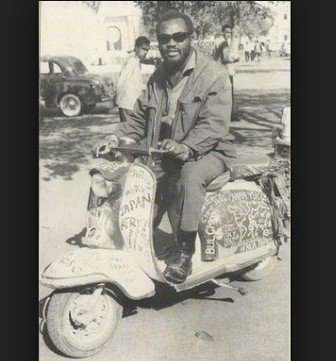 Ajala on his scooter

Ajala was then studying medicine at De Paul University in Chicago in America but his travelling adventures did not make his dream of becoming a doctor materialize.

He rather ended up acting in some movies after his cross-country journey in America won the hearts of many.

He, however, got trouble with the law in America and had to be deported from the country.

On February 2, 1999, Ajala died in abject poverty despite his fame. 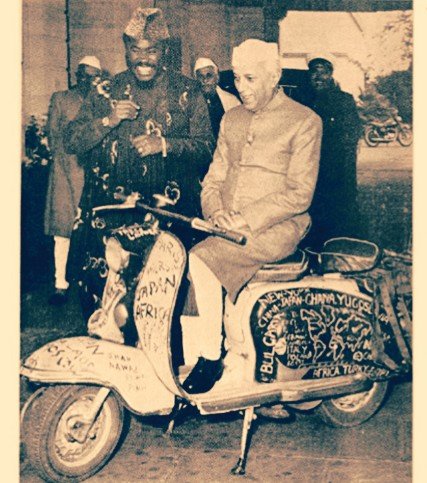 Ajala with Jawarhalar Nehru of India sitting on his scooter

Throughout his lifetime, he wined and dined with heads of state and leaders including the late Alhaji Tafawa Balewa, first Republic Prime Minister of Nigeria; the late Marshall Ayub Khan of Pakistan; the late President Makarios of Greece; the late Paudit Nehru of India; and the late Abdel Nasser of Egypt.

In spite of this, the famous Ajala died without a penny and with little recognition. It is documented that his grave in central Lagos is just like any other grave – nothing extraordinary.