On May 16, 1921, Egypt was abuzz with the news of the conviction of two women and their accomplices for murders they committed since 1919.

Many wondered, what drove two young women, Raya and Sakina Ali Hammam, from Upper Egypt to kill at least 17 women in Alexandria.

According to reports, the police in Alexandria received quite a number of reports of women disappearing without a trace.  They were disconcerted with the increasing number of missing women especially after they were told they were seen in the company of Raya and Sakina.

The two kept outwitting the police, who had interrogated them a number of times.

It only took a sudden move by Sakina’s landlord for the mystery to be solved.

Sakina, the youngest sister, had left her rental home, and to prepare the renovations of the house, her landlord decided to install water pipes. As the blind landlord started digging, the stench emanating from the ground overwhelmed him. His shovel hit something hard and when he groped the earth he discovered the human bones that had been buried underneath.

The police immediately started their investigation, setting off to Sakina’s new home before heading to Raya’s house where the strong smell of incense was used to cover up the corpses’ smell.

Raya, her husband, Sakina and her lover were all arrested together with their accomplices who included a goldsmith and other women.

Through the months of interrogations and investigations, the suspects tried to blame the crimes on each other.

However, the breakthrough came when Raya’s daughter Badia (10) incriminated all of them. She had however been warned by her parents not to reveal anything because they will do to her exactly what they did to the victims. 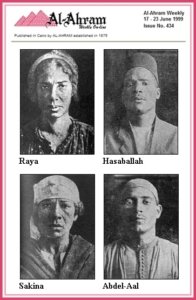 Raya and Sakina opted to start a public house business in their homes after their partners lost their jobs in the cotton industry following the economic crisis arising from the World War I outbreak.

They came under scrutiny for running such a business where prostitution thrived and had to seek protection from local thugs.

Their business was quite successful until the Egypt uprising in 1919. Strikes and curfew by British colonial government led to the deterioration of their economic situation.

Raya and Sakina started luring women adorned in gold jewellery to their home in Labban. Most of them were their acquaintances.

In a confession, the sisters stated they would offer the victim a drink, which had been drugged. One of the involved parties would then shove a piece of cloth in or clamp their hands over their mouth. Another one would grab the victim’s throat and two others would pin down the victim by holding their hands in the back and pinning their feet to the ground until they died.

Together with their husbands and two accomplices, Raya and Sakina were sentenced to death on On May 16, 1921.

The sisters became the first Egyptian women to be executed by modern Egypt.

Many books and works of art inspired by the sisters have been published.