Hip-hop artists Tainee and Donatella of the rap group AK are taking Finland by storm.  In addition to being a dope musical force, these two ladies are trailblazing the hip-hop industry in Finland with their cool, eclectic sounds.

I recently had the pleasure of seeing Tainee and Donatella take the stage at the Helsinki Poetry Connection open mic event, and simply put, it was lit!

Tainee’s sweet and smooth melodies, Donatella’s boss lady attitude, coupled with their striking stage presence easily makes them one of the finest Afro-music groups in Finland and one to watch in the African diaspora.

In this recent interview with Face2Face Africa, Tainee and Donatella discuss the music scene in Finland, making music within a male-dominated genre, authentic artistry as well as their latest EP, “Real Bitch Problems.”

Face2Face Africa: How did AK come about? When did you debut?

Tainee: Well, we both met and started making music a little after that. To be specific, we hit the studio a week later.

Donatella: Two weeks later, we debuted our first track “Locked and Loaded.” It was a teaser to let people in on who we are, what we are about, and the kind of music they should expect from us in the future. Two years later, here we are. 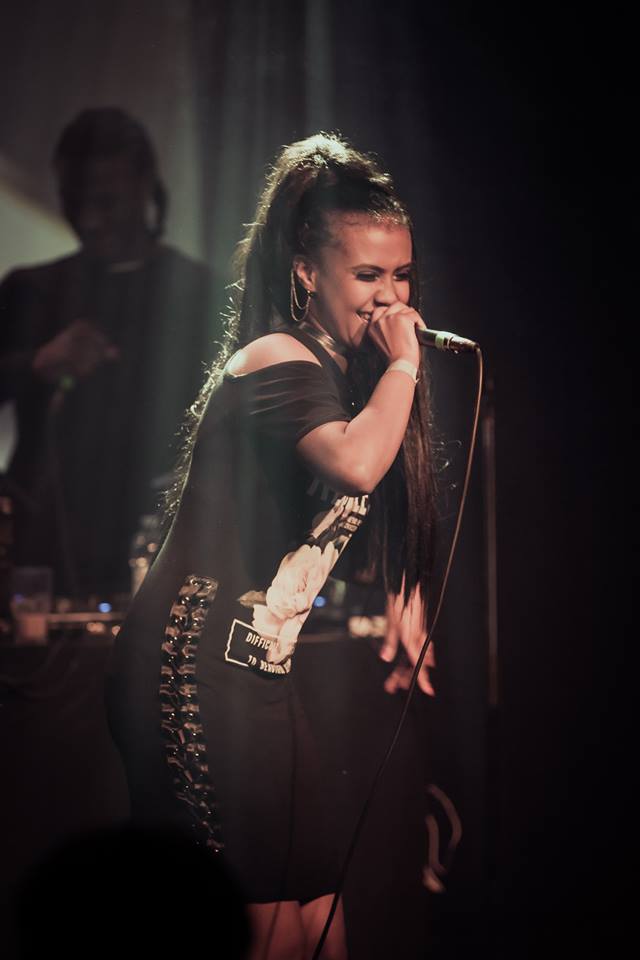 Tainee perfoming at the Tavastia Club in Helsinki, Finland

F2FA: At what point did you realize that making music was what you wanted to do as a profession?

T: I knew when we were the opening act for Antti Tuisku at Forum because it was one of the first times we performed for a huge crowd.

D: That is when we were convinced we could do this as a profession. At that moment, we really knew because of the reception we got.

F2FA: I have had the pleasure of hearing you live and you sound amazing or as we say nowadays “lit.” How do you prepare before taking the stage?

T&D: We honestly do not have any specific pre-performance rituals.

T: And go out and give it our best.

F2FA: How is the music scene in Finland?

D: At the moment, it is favorable if you are male. There are a lot [of] male artists that are up and coming, but it is getting better compared to what it was five years ago. It is slowly making room for diversity.

T: There is no originality. It is greatly lacking in authenticity. I cannot help noticing the emulation of other artists. I keep seeing Finnish versions of artists like Young Thug. But it is such a shame, because as an artist, you should have your own look and sound to represent your own music. There is no point in  imitating, copy pasting what other artists are wearing and doing.

F2FA: Do you think the music scene in Finland is ready to make room for diversity?

T: I would like to think so. The music scene here looks up to the American one. And in terms of music, America is known to embrace diversity. So we can only hope Finland will follow in its footsteps.

D: It is not just America. Sweden too. Hopefully, Finland will catch up. I think Finland is ready to have us awesome female recording artists.

T: I have noticed, when we perform, people will nod their heads to our music but walk away. They do not want to approach us or give our music a chance, which can be disheartening.

D: But it is getting better. I just wish people would give our music a chance based on what we have to offer — not on how we look. 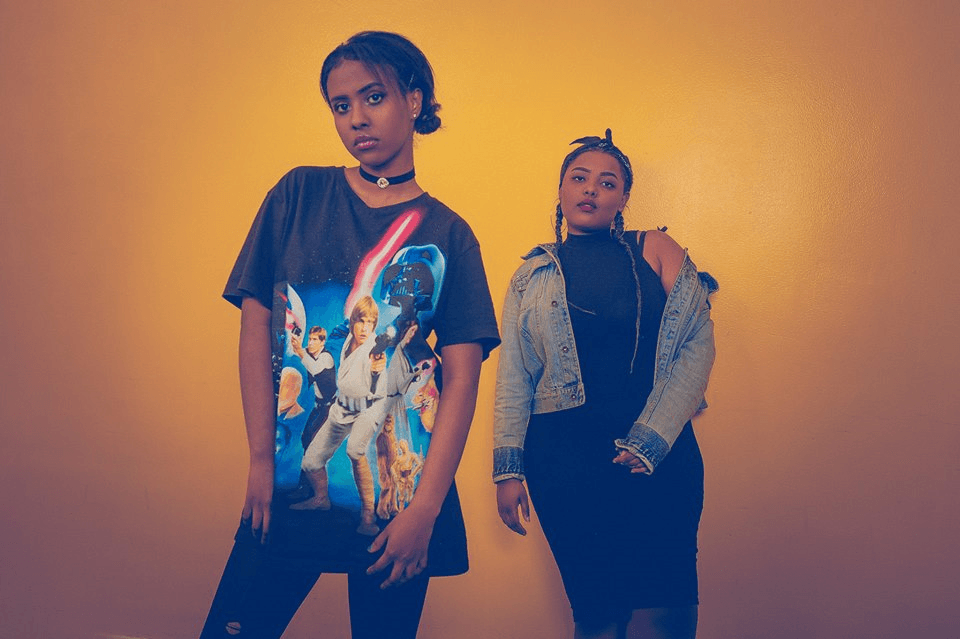 F2FA: Have you faced any backlash or negative criticism for being a female duo that takes on such a male-dominated genre?

D: On the Internet, it is inevitable. We have been criticized for the most trivial things like the shoes we wear in our music videos. But we have never had someone say it straight to our faces.

T: But that is not going to stop us. We have a song where we touch on how we plan on changing how they look at us women making music.

F2FA: You have been publicly vocal about how much harder it is for women to be successful in the music industry, especially if their genre of music is R&B and hip-hop. Why do you think that is ?

T: Because they always want to sexualize women. It cannot be about anything else but sex. We want people to pay attention to our music and message not just our sexuality.

D: It is not easy for women, because they are faced with the challenge of being recording artists without being too sexual. You do not see a man like 50 Cent twerking in a music video, because it is not required of him. But someone like Nicki Minaj is expected to do that in order to sell.

F2FA: Who do you cite as your influences? Which artists do you look up to?

T: I love Kehlani. She inspires me a lot.

D: There a lot of artists I like and listen to such as Stefflondon, Tink, and Lauryn Hill. But as much as I admire their artistry, I avoid emulating them simply because I strive to be and do better than them.

F2FA: As recording artists, what sets you apart from the rest?

T: The attitude we bring in our music and on stage while performing.

D: People appreciate our energy and the fact that we speak the truth through our music.

F2FA: Can you define the type of music you create? What does it reveal about you as musicians?

T: Our dominant genre is Hip-hop.

D: But we also try to make new sounds and different vibes. For instance, alternative trap. We record tracks where we have Tainee singing along to trap music. It is rare to hear music like that. You do not hear it all the time. Usually, you will hear rapping along to trap music but never actual singing.

T: Take one of our songs “Haters Anthem” as an example. At first, it comes across as trap-ish, especially in the hook, but once you hear me versing you will get Hip-Hop and R&B vibes.

D: There is always a message in all our songs. We do not make meaningless music.

F2FA: Do you try to hold back profanities in your music?

D: We do want to speak our minds, but at the end of the day, we do want to appeal to the younger generation as well. We want to be able to relate to them. With our upcoming projects, we will try to keep it PG-13.

T: We are known for being straightforward. In the beginning, we used  a lot of cuss words in our songs to get people’s attention. Now, we have toned it down because people do want to listen to what we have to say.

F2FA: Do you write your own songs? What is your song writing process?

T: We write all of them. In the beginning, we would find a beat and throw around ideas on possible lyrics. Then we would go our separate ways and write the lyrics individually, and later try to combine what we both had.

D: Currently, we hear a beat and come up with something on the spot. 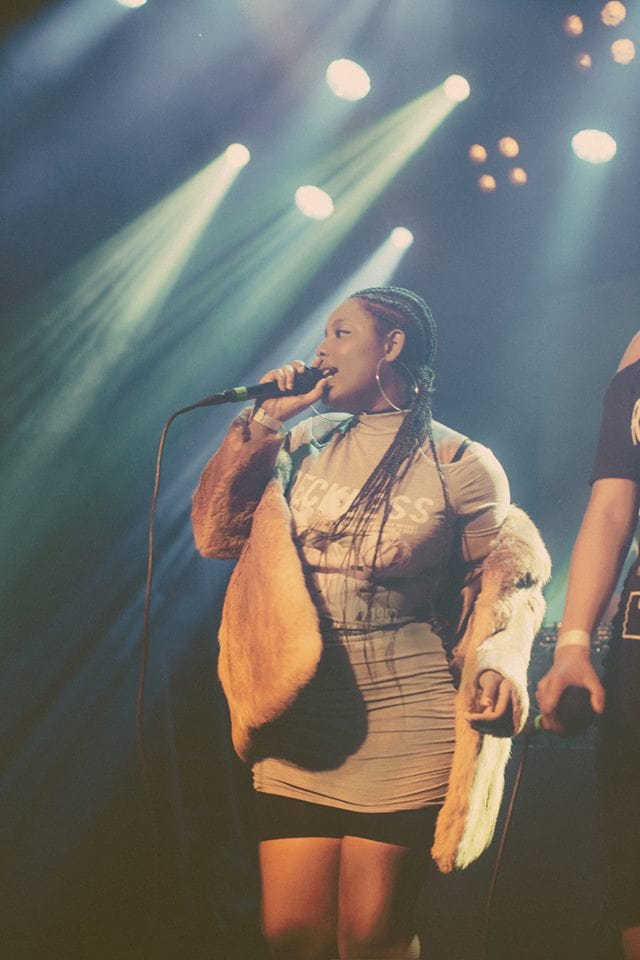 Donatella perfoming at the Tavastia Club in Helsinki, Finland

F2FA: How has your reception here in Finland been? Have the people been welcoming and accepting since R&B and hip-hop are not genres native to Finland?

D: So far, so good. It has been mostly positive than negative.

T: But we do occasionally get asked why we do not make music in the Finnish language since all our songs are in English. But the thing is we do not want to confine ourselves within the Finnish industry. We aim big and our end goal is to make it worldwide.

F2FA: Have you felt the pressure to compromise your art in order to sell or is staying true to who you are a top priority?

T: The priority is always staying true to who I am. Also, I would like people to hear what I have to say instead of saying what somebody asked me to say. Either you like me for who I am, or you can just F*** off.

D: I do not want to be anyone’s puppet. I want to say, feel, and act whatever way I like and I would like that to reflect in the music we make.

F2FA: Are you signed to any record company? Who is a part of your team?

T&D: No, we aren’t tied down to any contract per se. We work with Street Soul, which is an open agent, but it is not to say we have not been offered offers, we have had several offers. We are taking our time and exploring our options.

We have an amazing team, which includes DJ ISKU. He is our producer and sound engineer. He basically handles all the technicalities. Then there is our manager Rozza Dragoz. She is our everything and above. She pushes us to our limit and makes us do better, and we have our booking agent, Annika Oksanen, Live Nation.

F2FA: You recently released an EP? Could you please tell me more about it?

T&D: It came out 27th of May 2017. It is called “Real Bitch Problems” and has a total of six tracks. It is available on Shazam, Spotify Soundcloud, and Itunes.

It is about what girls go through but they do not really want to talk about, but we want people who listen to be able to relate. We have a song by the name “Thinking About You (Part 1 and 2).”

It is about the same topic, but we each have our own solo version: Tainee’s version is about affectionate and lovey dovey feelings toward a guy, but Donatella’s version is more sexual. We offer the striking contrast because we understand the two aspects of liking someone, the emotional and sexual.

Also, we have another track “I Ain’t Never Gonna Lose.” It is an inspirational song meant to remind anyone who listens to it to never stop chasing your dreams no matter what. And whatever your dream is just go for it.

F2FA: Where would you like to see yourselves in five years?

T&D: We hope to tour around the world, especially Europe, because we enjoy performing. It would be amazing if we would be the opening act for artists like Kehlani.

Listen to AK’s music — including their latest summer single ”Waiting” — on Spotify.