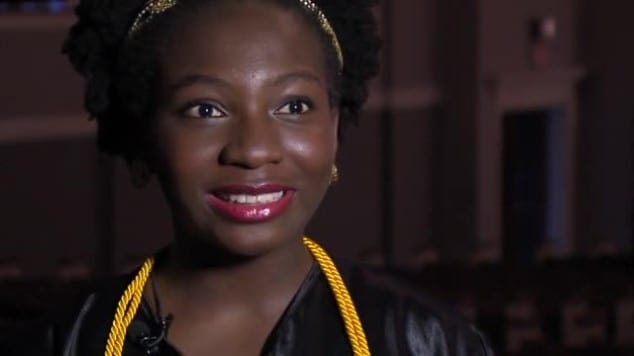 As high school seniors prepare themselves to walk the stage on their way to receiving a diploma, a young Ghanaian student, Akosua Beoke (pictured), in the United States has proven that her father’s sacrifice paid off. Beoke, a Greensboro, N.C. teenager has selected New York Ivy League institution Columbia University thus culminating a long journey for she and her family.

Akosua’s father, Frank Beoke, traveled to the North Carolina town seven years ago despite doing well in his native country. The elder Beoke, however, considered his children’s success to be far more paramount than his own. Fox 8 WGHP has more:

Beoke and her family moved to Greensboro from Ghana seven years ago. Her father Frank Beoke said it was a sacrifice well worth it for the opportunities for his children.

“It’s a sacrifice; I was actually in a good paying job back in Ghana, but then the family comes first,” Beoke said.

His daughter certainly impressed a great number of schools, with 24 universities around the country accepting her application. Her 2100 score on the SAT also helped her standings with the colleges and universities she and her family were reviewing.

As one of 45 graduating seniors at The Early College at Guilford school, Akosua was courted by six Ivy League schools, including Columbia, in the college search process.

Akosua says that while schoolwork was never a hurdle, adjusting to the cultural differences between Ghana and the United States was harder.

“One of the things that hit me was that Americans have really low perceptions of Africans, and I came from a middle-class African background so I was really shocked that they thought I lived in the jungle or something,” she shared.

Despite the ignorance she faced, Akosua is well on her way to greater heights as she enters Columbia this fall as a potential economics major.