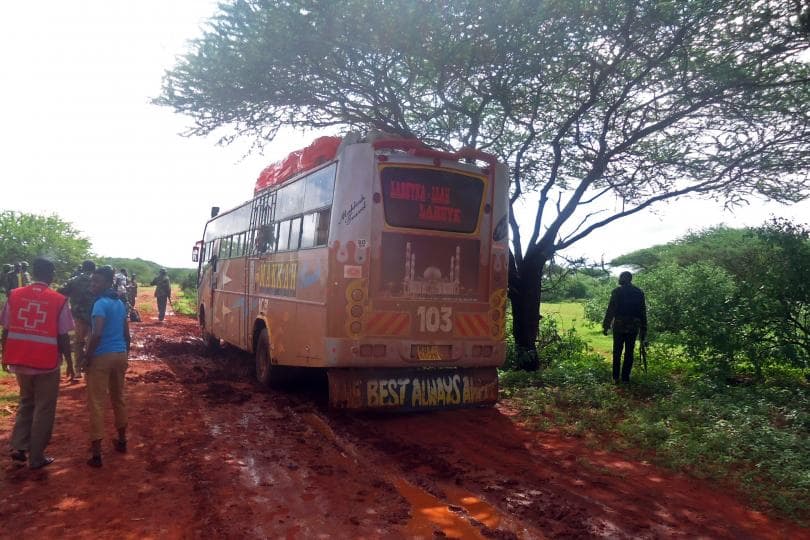 On November 22, 2014, Al Shabab killed 28 non-Muslim passengers on this bus as it traveled through Mandera County. Credit: STRINGER/AFP/GETTY IMAGES

A group of Kenyan bus passengers were able to foil a terrorist attack by Islamic gunmen when they refused to follow orders and identify themselves by religion.

Last November, 28 Kenyans who were identified as non-Muslim were killed by Al-Shabab during a bus attack in Mandera County, located along the northern border Kenya shares with Somalia.

But this Sunday, militants wouldn’t enjoy a repeat of their divisive efforts.

Chief Administrator of the Northeastern region Mohamud Saleh told Al Jazeera, “The attackers tried to wave the bus down but then sprayed it with bullets when the driver refused to stop.”

Once the bus stopped between Kutulo and Daba village in Mandera County, the gunmen reportedly told the more than 50 passengers to identify themselves if they are Muslim.

However, the Muslims reportedly told the militants “to kill them together or leave them alone,” Mandera Governor Al Roba said.

An employee of the Makkah bus company, who had spoken to the driver involved in the attack, confirmed to the BBC that Muslims had refused to be separated from their fellow Christian passengers.

Of the bus passengers’ actions, Roba says, “The locals showed a sense of patriotism and belonging to each other.”

And while the militants did kill and injure a handful of people, they eventually left the majority of passengers alone.

Saleh says, “Two people were killed and at least three people were injured in the attack. It is not yet clear who is behind the assault, but I’m not ruling out that this was a case of banditry.”

Unfortunately, one of the victims was killed after attempting to run away from the bus.

Obviously, the November 2014 bus attack isn’t the only time militants have used religion as a basis for slaughter; this April, during Al-Shabab’s grisly Garissa University attack, they also singled out Christians, ultimately killing 148 people.