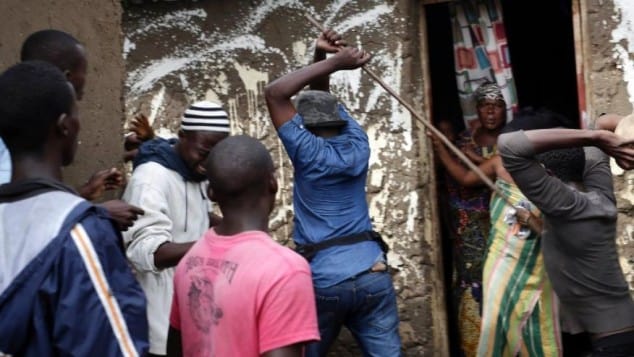 After hearing assessments from the UN Human Rights Council as well as conducting their own in-country investigation last weekend, the African Union (AU) has decided to deploy 5,000 peacekeepers to the East African nation of Burundi to avoid genocide, reports BBC.

For the first time in its history, the AU is invoking a charter to enter a member state’s territory without its permission.

The charter allows for the intervention when there is evidence of war crimes, crimes against humanity, and/or genocide.

Burundi has been in turmoil ever since President Pierre Nkurunziza announced that he would be considering running for a third term earlier this year. 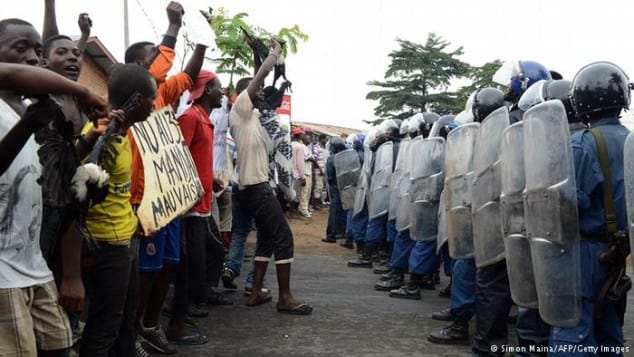 At the time, he insisted he met constitutional requirements since Parliament chose him as president for his first term rather than the people.

And even though the Constitution clearly indicates that one can only serve two terms as president, by April, President Nkurunziza was voted the nominee by his party.

Afterward, Burundians would protest in the streets.

The nomination immediately threw the East African nation into chaos, with 40,000 fleeing the country to go to neighbors Rwanda, Tanzania, and the Democratic Republic of Congo.

Many of those who remain in Burundi are protesting in the streets in Bujumbura, the capital, demanding that the President step down.

By May, Major General Godefroid Niyombare would lead an unsuccessful coup attempt against the President as he attended a summit in Tanzania.

And by August, President Nkurunziza would be sworn in as president.

On Thursday, the President was sworn in for the third time, surprising most since the ceremony was originally scheduled to take place next week.

Due to the date change, no foreign head of state was in attendance.

And for the first time in history, the African Union refused to be present for the occasion, with the BBC reporting, “[This] is the first time it has taken such a stance against a member state.”

The U.S. State Department and the European Union also heavily criticized President Nkurunziza for his re-appointment.

And while President Nkurunziza has attempted to go back to business as usual, those who look to protest his presidency have been found dead in the streets. 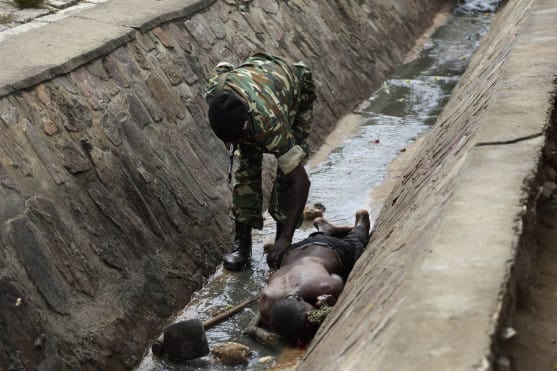 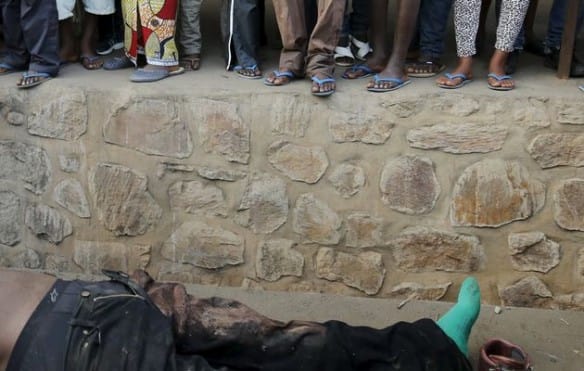 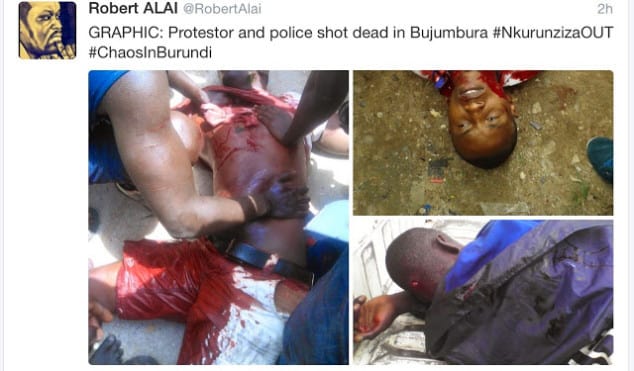 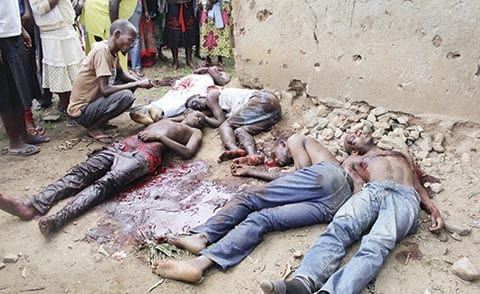 A man crouches down after recognizing one of the victims, amongst five dead bodies found in a street in the Cibitoke neighborhood of the capital Bujumbura, Burundi Wednesday, Dec. 9, 2015. Witnesses say seven people have been killed in Burundi’s capital Wednesday, in violence associated with turmoil over President Pierre Nkurunziza’s extension of his term in office, with one witness saying people dressed in police uniforms pulled five people from their houses in the Cibitoke neighborhood and shot them dead Wednesday morning. (AP Photo) 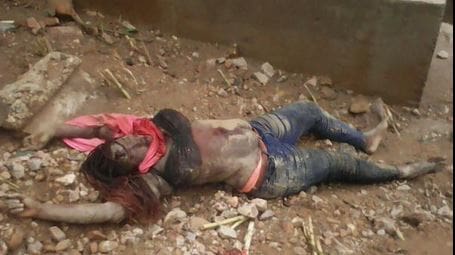 Last month, reports began to come out about both police and militia silencing civilians and the media with violence.

And while protests were initially boisterous and spirited, now it is being reported that protesters — as well as the media — have been allegedly silenced by the police and militia with a slew of tortures and dead bodies that are said to be cropping up on a daily basis.

One unnamed blogger said of the situation in Burundi, “You can find people who are killed with bullets. Others have been tied up, put in to sacks, thrown in rivers, killed in their homes, and recently, someone was killed and his heart was pulled out.”

However, the most violent incident to happen in recent weeks occurred last Friday, when 87 people were killed in the capital of Bujumbura.

In response, the UN Human Rights Council sent independent investigators to assess Burundi’s alleged abuses, with Zeid Ra’ad al-Hussein, the UN high commissioner for Human Rights, concluding, “Burundi is at bursting point, on the very cusp of a civil war [which could have] ethnic overtones [similar to past conflicts in Burundi].

The AU also conducted their own on-ground investigation and said by last Sunday in its preliminary findings that “members of the team heard reports of arbitrary killings, torture, and the arbitrary…closure of some civil society organisations and the media.”

With past conflicts, Al-Hussein is referring to the 300,000 Burundians killed during the nineties due to ethnic conflict between Hutus and Tutsis as in Rwanda.

Various officials fear that if pushed hard enough, President Nkurunziza, a Hutu, may look to galvanize his ethnic group in order to distract the masses from focusing on his illegal term and instead focus on old ethnic tensions.

Such a move could reignite Burundi’s ethnic conflict and trigger genocide.

Consequently, the AU, which has insisted that they will not allow genocide to re-occur in the nation, has decided to enter the country, even though they do not have Burundi’s consent.

While their decision has already been approved by the Peace and Security Council, the AU is waiting on the United Nation’s final approval for the peacekeeping deployment.