Cameroon (Face2Face Africa) Cameroon’s international soccer midfielder, Alexandre Dimitris Song Bilong, who is popularly known on the field of play as Alex Song, has announced that he will no longer play competitive international soccer with the Indomitable Lions of Cameroon.

The 27-year-old Song, who currently plies his soccer trade with English Premier League side 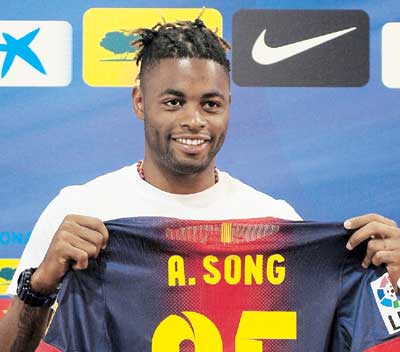 West Ham United, made the decision to quit the national soccer team of Cameroon shortly after he was not called by Coach Volker Finke to be a part of the 23-man squad for the biggest sporting rendezvous on the African continent, the African Football Cup of Nations (AFCON) 2015, which is due to kick off in the Central African country of Equatorial Guinea on January 17th.

Song, who was loaned from Spanish La Liga soccer side FC Barcelona to Premier League club West Ham United, said on his Instagram:

“My love for my country will never change. I want to take time to focus purely on domestic football and rebuild my career at West Ham United.”

Song, who has won 47 caps for the national football team of Cameroon, added:

“Since the World Cup in the summer and my subsequent exclusion from the Cameroon squad for the African Cup of Nations, I have taken the decision to retire from international football.”

Earlier talks between Song and Cameroon football officers for a possible late call up to the Indomitable Lion’s den had failed:

“It is true that there were some discussions of late to include me in the squad for this tournament, but I feel after a lot of careful thought and numerous discussions with my family this is the right decision.”

Many of Song’s fans and soccer analysts aren’t happy about his decision to quit the Lions.

“It is really a pity. He is still very young with plenty of talent and should have not precipitated taking such a decision. I strongly believe that he will one day come back to his decision because we do really need him to play for the lions as the team is currently under reconstruction.”

“When I got the news I did not want to believe it. But after it was announced, that is when I came to believe it was true. He is so talented and our football officials must take the right steps to convince him for a possible returned to the national football team.”

“If he wasn’t called up as part of the squad for AFCON 2015, it does not mean that he would not be called up for subsequent assignments with the Lions. Although he put up a disappointing show in the Fifa World Cup in Brazil by elbowing a Croatian player while on the field of play and was sent off, he still remains an excellent player. We are really going to miss him.”

Song was first called for the national team in 2005 and played for Cameroon during the 2008 AFCON in the Lions first group game beating Egypt by 4 goals to 2. He came in the course of that game to replace Stephen Mbia. Song was a revelation during the competition winning Man of the Match trophy in Cameroon’s semi-final game against the Black Stars of Ghana and ended in the competition best XI.

Song was part of the 2010 World Cup in South Africa and that of Brazil 2014. He was sent out with a red card for elbowing Mario Mandzukic, though, in Cameroon’s 4 to 0 defeat by Croatia in Brazil. He later apologized to Mandzukic and to the people of Cameroon for the act. The anti-sporting act enabled FIFA to fine Song $22,300 USD, which was accompanied by a three-match ban from competitive international football.