Update March 25, 2019: The main picture of this article has been deleted and we want to apologize to Rita Kyomukama Williamson for the unlawful use of her image without her consent.

How much influence should aunties have on their nieces? In many African cultures, aunties provide counselling to their young nieces as they age from adolescence to adulthood. When it comes to marriage, these aunties prepare their nieces for the challenges that lie ahead.

But for the Banyankole people in Southwestern Uganda, the aunt had more than the above, especially during the marriage.

The primary responsibility of the aunt was to confirm that the groom is potent and that the bride has defended her virginity before the marriage is consummated. As a potency test for the groom, the aunt was sometimes required to have sex with the groom for confirmation of his potency and virility.

She also had to “test” if the bride is still a virgin before they are allowed to consummate their marriage.

In other traditions, the aunt is said to go as far as listening in or watching as the bride and groom have sex in order to prove the couple’s potency. 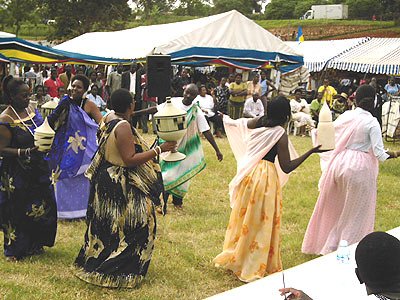 A marriage ceremony in Uganda — UGPulse.com

Inasmuch as this outdated practice may sound weird, it shows how the people of Banyankole, particularly the Bahima tribe hold virginity in high esteem.

As soon as a Banyankole girl is eight, she goes through a lot of restrictions to prepare her for marriage.

When other children her age in other cultures are out having fun and playing, a girl in this part of Uganda is mostly kept indoors, where she is fed beef and millet porridge and forced to drink milk in large quantities so that she becomes fat.

Being fat is synonymous with beauty among the Banyankoles.

When she starts developing breasts, she is also asked by her parents to abstain from sexual activities.

It is the duty of a Banyankole father to find a wife for his son as he pays the bridewealth as well. This consists of some cows, goats and pots of beer, depending on how rich a person is.

Once the bride price is paid, the marriage preparations begin. On the wedding day, there is a lot of feasting at the bride’s home, where the father is expected to slaughter a bull.

At the bridegroom’s home, there is another feast where the marriage is consummated. This is after the bride’s aunt has “tested” her niece’s purity and slept with the groom to also check his potency.