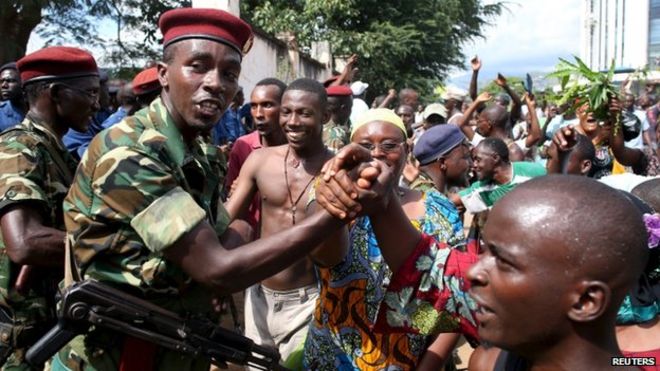 UPDATED 4;46 P.M., 5/13/15: In response to the coup declaration, Burundi President Pierre Nkurunziza has reportedly left the summit he was attending in Tanzania to return to his country and has issued the following statement:

“It is with regret that we have learned that a group from the armed forces mutinied this morning and declared an imaginary coup.

“This coup attempt has been foiled and that these people, who read the coup announcement on the radio, are being hunted by defence and security forces so that they can be brought to justice.”

At Major General Godefroid Niyombareh’s coup announcement, thousands of Burundians took the streets, but they were soon met with soldiers who reportedly fired in to crowds.

Demonstrators also reportedly broke in to a national prison and released detained protesters before they burned down the building.

According to eyewitnesses, the presidential palace appears secure, with soldiers who are loyal to the president, standing watch.

Gen. Niyombareh is said to have been a close ally to the President before being dismissed as the intelligence chief in February.

According to Major General Godefroid Niyombareh, Burundi President Pierre Nkurunziza (pictured below) has been overthrown in a coup due to his attempt to run for a third term, reports the BBC.

RELATED: IN SPITE OF PROTESTS, BURUNDI PRESIDENT INSISTS ON RUNNING FOR THIRD TERM

President Nkurunziza is currently in Tanzania to meet with a number of East African leaders
over the crisis that has developed since he announced that he would be running for a third presidential term. 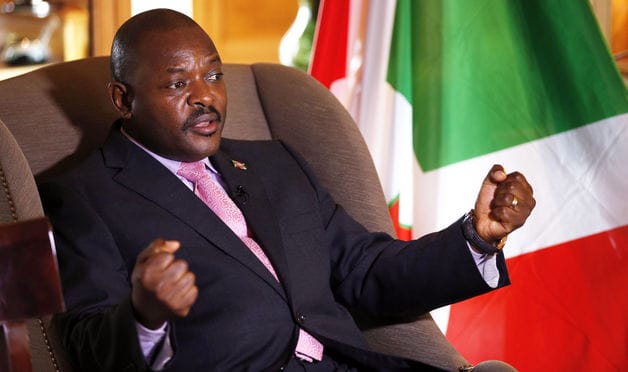 The Burundian constitution states that one can only serve two terms of five years each as president for the East African nation; however, both Nkurunziza and his party, the National Council for the Defense of Democracy-Forces for the Defense of Democracy (CNDD-FDD), who re-nominated the 51-year-old in late-April, insist that he isn’t violating the constitution because Parliament — and not the people of Burundi — elected him for his first term.

The nomination caused an outburst of daily protests in the streets, with more than 20 civilians losing their lives.

In response to Nkurunziza’s refusal to step down, Gen. Niyombareh and his “national salvation committee” took over the airwaves on Wednesday to declare that the President has been fired.

“The masses have decided to take into their own hands the destiny of the nation to remedy this unconstitutional environment into which Burundi has been plunged.

“The masses vigorously and tenaciously reject President Nkurunziza’s third-term mandate… President Pierre Nkurunziza has been relieved of his duties. The government is overthrown.”

The news of the coup, according to eyewitnesses, caused protesters to cheer in celebration in the streets. 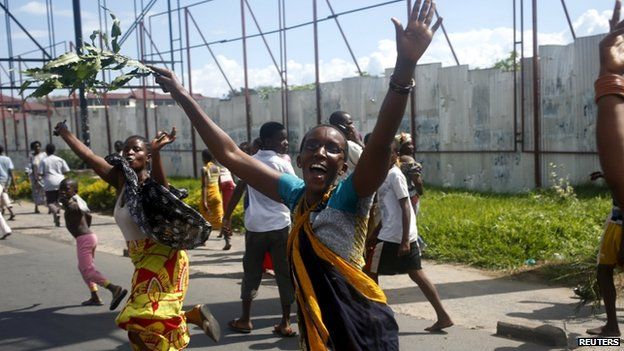 In English, the Burundi Presidency wrote, “Situation is under control;” there is “no coup.”

This story is developing….