It is officially Carnival season in the Caribbean and as the world descends upon the twin islands in celebration of the country’s hypnotic annual festival, it is important to look at the celebration’s history.

Trinidad and Tobago’s Carnival evolved from the tension between the French masquerade and the African Canboulay.

In the 1800s, white and free colored people in the islands staged elaborate masquerade balls at Christmas, before the Catholic lent season as a “farewell to the flesh” (carne vale). There, they mimicked and entertained each other by wearing masks. Slaves were prohibited from participating in this event. 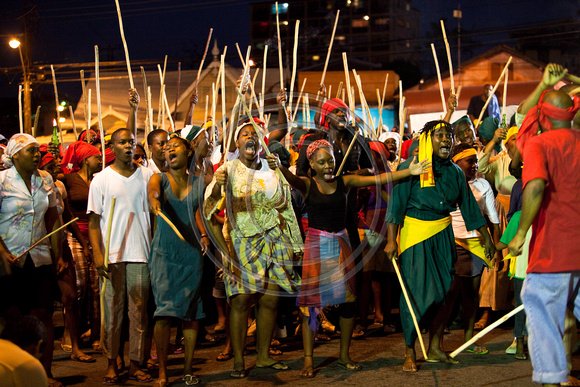 Rather, slaves held the Canboulay, a sugar cane harvest festival where slaves and descendants of slaves marched through the town with burnt cane (cannes brulées, later Canboulay). The celebration was full of African rhythms and movement – singing, dancing, and chanting. It was observed on August 1st, the anniversary of the Abolition of Slavery.

In 1881, there were the Canboulay Riots, where descendants of slaves fought for a right to maintain the Canboulay against British officers who saw the festival as threatening and wanted to crack down on aspects of the celebration, arguing that people running through the town with burning torches would burn the town down. Lives were lost in the clash but the people won against the officials to maintain the celebration which was widely popular on the islands. 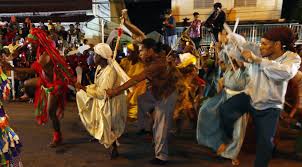 In 1833, after emancipation, the Canboulay which was formerly held on August 1st was now celebrated during the time of masquerade, and the iconic Carnival celebration in February was born. It incorporated African expressions, like the calinda (stickfighting set to chanting and drums) with chanting, music, and masquerade.

The Artists’ Coalition of Trinidad and Tobago aptly describe the two lineages of Carnival below:

In the Trinidad Carnival there are 2 distinct traditions. The Mardi Gras tradition (like that practiced by white New Orleans to this day) is derived from the French Grand Ball tradition which itself has roots in old European carnivals. The Mardi Gras is elite, exclusive, mostly indoors, based upon drunken revelry, with an emphasis on role reversals (gender, class, etc). It is mask as frivolity and debauchery. The other Trinidad Carnival tradition is the Canboulay which is African- but it has incorporated vital masquerade traditions of the East Indian and Amerindian. The Canboulay is inclusive, drum-music led, concerned with the vital African Oratory tradition, is about sacred masquerade, ancestral masquerade, satirical masquerade, and is revolutionary. It is connected to dozens of Secret Society masquerade forms which hid and mutated their forms into all the things we call ‘traditional mas’- the Pierrot Grenade, the Midnight Robber, the Indian Masks, the Sailor Masks, the Cow Bands, the Devil bands, etc. Nearly every single traditional mas has an African masking precedent. In form and function. 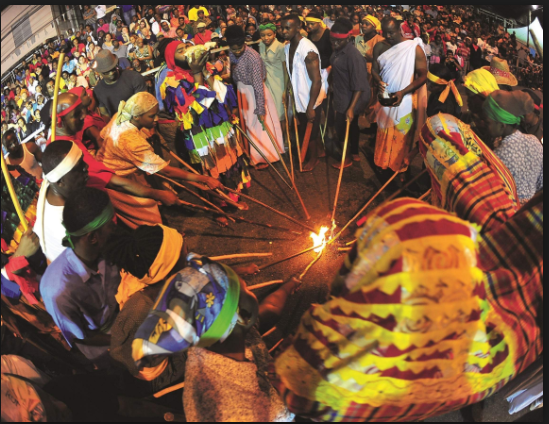 Although many people remember Carnival for the scantily clad women and raunchy soca music, the celebration stems from a history of resistance and emancipation. Each year, Carnival begins with re-enactment of the Canboulay Riots in commemoration of this history.