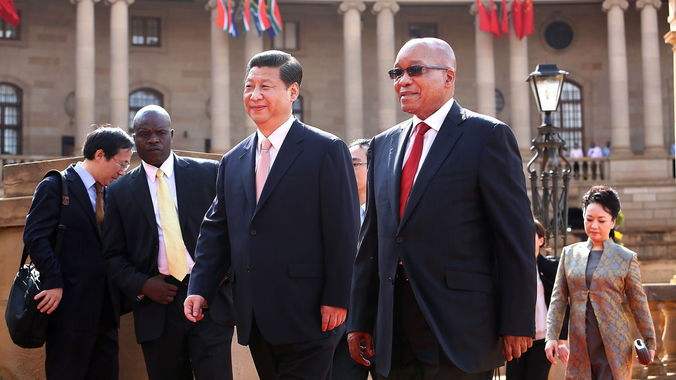 With Chinese President Xi Jinping (pictured) beginning his four-day visit to Africa in Zimbabwe on Tuesday, there have already been dozens of deals signed just ahead of the Forum on China-Africa Cooperation (FOCAC) Summit, reports Newsweek.

In Zimbabwe, President Xi declared a number of loans to help support what is described as a “struggling” economy.

And on Wednesday, President Xi traveled to South Africa, where 26 deals were signed.

Of the billions already pledged, $2.5 billion has been promised to South Africa’s state-owned rail operator.

President Xi is said to be especially eager to continue to build his relationship with South Africa, because he reportedly sees the nation as the “gateway to the continent.”

In fact, Professor of International Politics at the University of London’s School of Oriental and African Studies Stephan Chan told Newsweek, “[South Africa’s] got good communications and transport networks that reach beyond South Africa itself.”

South Africa’s state power company also received a $500 million loan and the creation of a car manufacturing plant was announced.

As for the FOCAC Summit, this is the sixth summit to take place after initially kicking off in Beijing in 2000.

Meeting every three years, the summit, which will take place on Friday and Saturday in Johannesburg, will re-solidify ties between African nations and China.

On Tuesday, Nigerian President Muhammadu Buhari announced via Twitter that he would be meeting with President Xi at the summit to revive the West African nation’s power and railway projects:

Pres @MBuhari is also expected to discuss ways of reviving the 3,050 MW Mambila Power Station, conceived in 1982, but still undeveloped

Another rail project for renegotiation is the $8.3bn Lagos-Kano standard gauge modernization, of which only Kaduna-Abuja has been finished

The discussions with President Xi Jinping will take place at the Forum on China/Africa Cooperation (FOCAC) in Johannesburg, Dec 4-5, 2015.

And while China is said to be eager to do even more business with Africa’s largest economy, they are also said to be wary due to Buhari’s recent appointment.

Chan added, “What you’ve got is a very strong Chinese awareness that President Buhari is new in the job.

“He’s set about a very ambitious program of transformation of public administration…and no one knows whether he’s going to be successful or not.”

With China as Africa’s top trading partner, $222 billion worth of goods and services were traded between the two in just 2014 alone.

So far, China has funded more than 2,500 development projects across the continent while African nations offer oil, precious metals and minerals as well as other commodities in return.

Just before President Xi’s arrival on the continent, another $930 million in investment — covering  the energy, pharmaceutical, and metal sectors — was announced between China and Africa.

And while China’s African investment fell by 40 percent in the first half of 2015 due to China’s own economic woes, President Xi’s presence on the continent this week looks to reassure African nations that China intends to continue doing business with the continent.

The only nations not doing business with China are Burkina Faso, Gambia, Swaziland, and Sao Tome and Principe.