Germany has announced its plan to officially apologize for Namibian massacres committed by its troops in the Southern African country during its colonial period, according to Times Live.

In a statement issued yesterday, the German Foreign Ministry announced that German President Joachim Gauck is willing to issue an official apology for the Namibian genocide, but clarified that the apology won’t be tied to any legal ramifications.

“We are working towards a joint government declaration with the following elements: common discussions on the historical events and a German apology for the action in Namibia,” Sawsan Chebli, the German Foreign Ministry spokesperson, told reporters in Berlin.

She further announced that the two nations have agreed to a joint investment program that will facilitate the development of new infrastructure in Namibia, including the construction of a seawater desalination plant, according to Daily Sabah.

It is widely reported that German troops massacred more than 75,000 Namibians, mainly from the Herero and Namaqua tribes, between 1904 and 1908.

Many have termed it as “a campaign of racial extermination and collective punishment” that Germany undertook against Africans who rebelled against the autocratic German colonial rule.

In January 1904, members of the Herero tribe revolted against the invading Germans, which led to the “Battle of Waterberg.” However, Germans won and drove the Herero to the Namib desert where most of them died of starvation and dehydration. 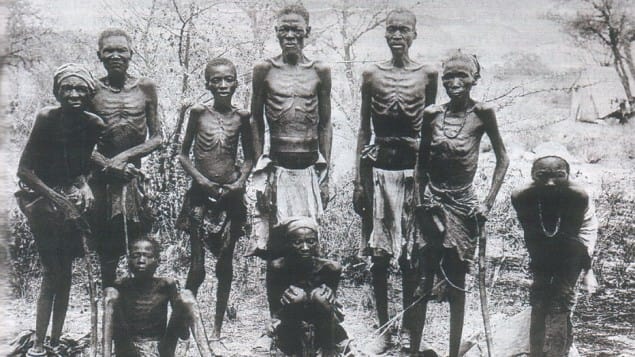 Survivors of the Namibian massacres in Namibia. Times of Israel

In October of the same year, members of the Namaqua tribe rose against the Germans but were soon overpowered by the well-armed German troops. They suffered the same fate as the Herero.

Thousands of native Namibians were also imprisoned, where most of them died of abuse and/or exhaustion.

In the “Whitaker Report” of 1985, the United Nations recognized the two Namibian massacres as “an attempt to exterminate the Herero and Namaqua people.”

In 2004, Germany acknowledged the killings but rejected calls for financial compensation for the victims and their descendants. Last year, the German government declared the events as a “genocide” and “part of a race war.”

In 2011, Germany returned 20 skulls of persons who died in the Namibian massacres. The skulls were reportedly taken to Germany for scientific research to “prove” that white Europeans were superior to Africans.