U.S. auto giant General Motors (GM) announced it is pulling out of the African market and selling off its car manufacturing facility in South Africa.

The firm intends to sell its factory in Port Elizabeth City, where it manufactures its Chevrolet brand, to Japan’s Isuzu Motors Ltd., reports the BBC.

In its announcement on Thursday, GM President Stephan Jacoby said the sale was based on the company’s decision to wind down operations in a number of emerging markets and focus on fewer and more profitable markets:

After a thorough assessment of our South African operations, we believe it is best for Isuzu to integrate our light commercial vehicle manufacturing operations in to its African business.

We determined that continued or increased investment in manufacturing in South Africa would not provide GM the expected returns of other global investment opportunities.

The company also said it would restructure operations in India and Singapore.

GM, however, promised to partner with car dealers on a “robust transition plan” while continuing to provide existing Chevrolet and Opel customers with parts and service support.

GM’s exit from the South African market brings the company’s 91 years of operation in the country, dating as far back as 1926, to an end.

Meanwhile, South Africa’s trade union for auto industry workers NUMSA says it wasn’t consulted before the sudden withdrawal of GM from the country.

The union says it will consult with its lawyers to resolve what it described as a crisis:

This is the second time that GM is pulling out of South Africa‚ and as NUMSA, we smell a rat. We suspect that the shareholders got a very good deal at the expense of the workers.

The company has already shut down the plant and has indicated that they will meet with us to discuss the latest developments‚ but that is after the fact‚” NUMSA General Secretary Irvin Jim says. 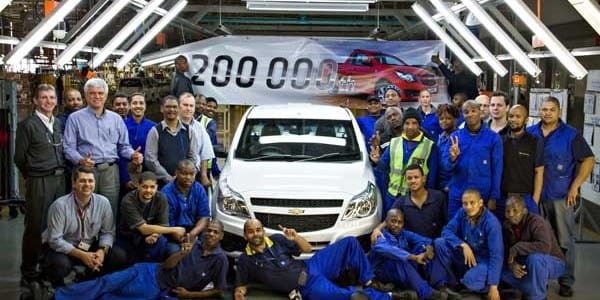 The union also expressed concern over the job prospects of about 1,500 of its members who are employees of GM:

There was no consultation with the union‚ and furthermore‚ the company has not divulged any details about the fate of its employees affected by this restructuring. By shutting down operations in South Africa, this will have a major impact not just on GM plants but for companies along the value chain as well.