Cameroonian inventor Arthur Zang has won the Africa Prize for Engineering Innovation in recognition of his portable heart diagnostic machine. The remarkable invention, which is named Cardio Pad, was designed to diagnose heart problems among residents of various rural communities in Africa and transmit the results via internet to heart surgeons for interpretations.

Zang’s Cardio Pad involves a touch-screen heart monitoring device that records the heart rate of a patient via Bluetooth-connected electrodes and subsequently sends a digitized electrocardiogram (ECG or EKG) to nearby healthcare center. There, a cardiologist will evaluate the tests and return a diagnosis to the patient. The whole process takes less than 20 minutes diagnosis all in less than twenty minutes. 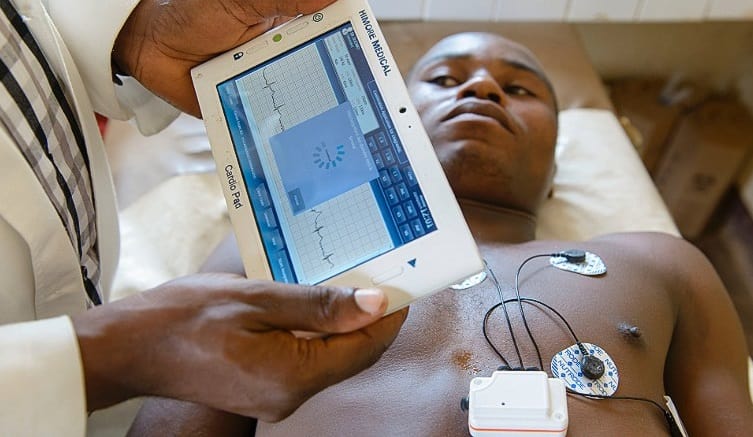 The cardio pad being used to test the heart rate of a patient (photo:edition.cnn.com)

Zang was rewarded with a £25,000 (about US$36,500) cash prize along with 12 other entrepreneurs who had been shortlisted for their innovations in various fields as health, agriculture and renewable energy. The prize awards were based on the vast contributions such innovations would have on the development of the African continent.

According to Director of the Innovation Prize for Africa (IPA) Pauline Mujawamariya Koelbl, the award ceremony is proof that Africa has the potential of solving her own problems.

“In the past five years, I’ve seen innovation grow from a mere buzzword to a sturdy path for African growth in multi-disciplinary industries across the continent. As Africans, we have the talent, potential and clout to solve our own problems with ingenuity too, and IPA is testimony of this,” she stated.

Face2Face Africa had reported earlier that the initiative had attracted over 6,000 innovators across 50 African countries over the years, receiving more than a thousand innovative submissions in 2016 alone.