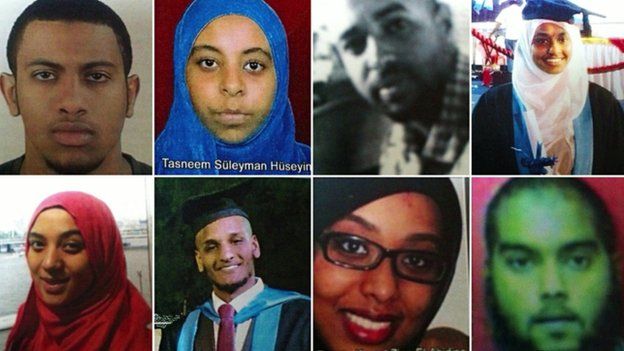 At the University of Medical Sciences Technology (UMST) in Khartoum, at least 16 students were recruited by former student and British medic Mohammed Fakhri Al-Khabass (pictured below) to join the Islamic State, reports the BBC.

Like Al-Khabass, the majority of the students are children of doctors in the United Kingdom. 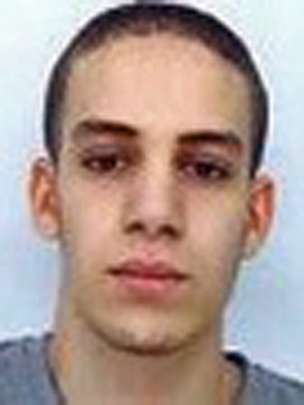 Desiring their children to reconnect with their African and Islamic roots, many of the parents, who are mostly British-Sudanese, sent their children to their homeland with the intention that once they finished their studies, they would return as doctors to Britain.

However, with Al-Khabass, who is British-Palestinian, leading UMST’s Islamic Cultural Association (ICA) as president by 2011, that dream would be sidelined by Al-Khabass who reportedly dissuaded students from working in the West.

A number of students and ex-students at UMST – speaking to the BBC on condition of anonymity – said [Al-Khabass] used his role within the ICA to spread a highly-politicised version of Islam. Ultimately, he started dissuading people from pursuing careers in the West.

And while Al-Khabass’ ICA meetings appeared to be mostly innocuous, it was reportedly the private meetings — where he would show footage of the Syrian regime victims bombing civilians — he hosted off campus that revealed his true focus.

By March, nine British-Sudanese students and former students (pictured top) would reportedly fly from Khartoum to Turkey and then cross over in to Syria.

And then another seven would leave by June, with two being detained and then returned to Khartoum. 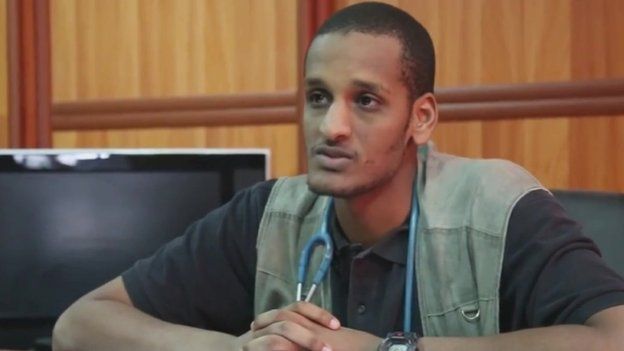 Ahmed Sami Kheder (pictured) is described by a friend as being “decent, smart, cool, and outgoing — never the kind of person who would be speaking or encouraging the idea of jihad or terrorism.”

Yet, Kheder, after leaving with his younger sister Nada with the first group, was featured on an IS propaganda video by May (pictured). 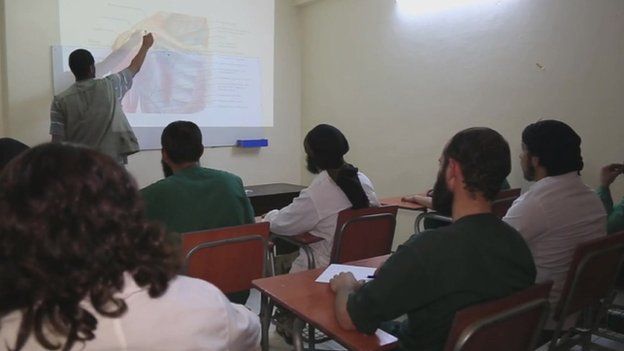 IS films usually show pictures of masked men posing with guns. This time a softly spoken man was appealing for fellow UK doctors to join him in building a new society.

Sitting behind a desk in a wood-panelled office with a stethoscope around his neck, Mr Kheder was serious and subdued.

He said: “There is a really good medical service being provided here, lots of hospitals… paediatric hospitals, with specialised doctors.”

At this stage of his career he would normally be a junior doctor. In the film, which shows glossy wards, an MRI scanner and babies in incubators, he is seen teaching students.

He finally addresses the camera, saying: “Dear brothers and sisters, we as Muslims and as doctors have a great responsibility.
“All you are doing is sitting in the West in the comfort of your homes. Use your skills and come here.”

When Kheder’s peer viewed the video, she was reportedly shocked, saying, “He looked like he was brainwashed or was talking through someone else.”

Brothers Mohammed and Ibrahim Ageed (pictured), whose father is also in the medical field as an Accident and Emergency consultant in Leicestershire in the English midlands, were also described by a friend as “the most kind-hearted, soft, polite, humble people I’ve met.”

Still, the Ageeds would leave with the second group of young doctors to Syria and haven’t been seen since.

“If you don’t understand Islam and you don’t know the answer to the questions or points they’re putting to you… you can easily be taken in by what they say.”

Meanwhile, authorities haven’t been able to verify the whereabouts of Al-Khabass: while some are saying he is indeed in Syria, others believe he is still in Sudan.

Either way, a former student of UMST lamented that while it is disturbing that some students are traveling to Syria, it is equally disconcerting that some recruits are allegedly being directed back home.

“From what I’ve heard there are IS supporters who have not left, and intend on coming back to the UK to work with the NHS – for whatever reason.”