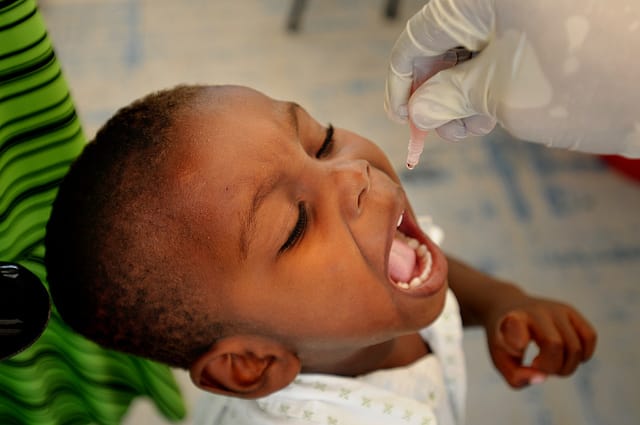 Yaounde, Cameroon (Face2Face Africa) The incumbent government of the Republic of Cameroon has taken another step forward in the fight against eradicating the wild polio disease through the introduction of an Injectable polio vaccine in all hospitals and health units in its expanded vaccination programme. This new polio injectable vaccine has come to replace the old one that was administered orally (pictured).

According to Cameroon’s minister of public health, Andre Mama Fouda, the introduction of the injectable wild polio vaccine is an initiative of the World Health Organization (WHO); WHO is determined on stopping the polio virus from attacking children. Meanwhile, the old polio vaccine that was administered will be stopped at the beginning of 2016.

This vaccination programme is expected to cover children between birth and 11 months old. “The injectable polio vaccine ensures additional protection against polio and reinforces the collective immunity of all children who are less than 5 years old,” added Minister Mama Fouda.

The most-vulnerable victims of the virus are children younger than 5 years old who have not been administered all the doses. According to health officials, polio is an aggressive disease caused by the polio virus, which is spread through the nervous system of a person and leads to paralysis and, in some cases, death.

In 2012, the WHO declared that the eradication of polio was a priority; therefore, a new strategic plan was put in place to exterminate the virus. It is expected that the final face of this immunization programme will be completed in 2018.

Most Cameroonian Mothers have reacted positively to the introduction of the new polio vaccine: Lum Beatrice says, “I think that this new vaccine is nice because it injectable unlike the other one that was administered by oral route that caused some children to vomit.”

“I am very happy that this new polio vaccine has come,” says Mbassi Josephine. “Our children will be injected and they will stay very strong and healthy, free from this very bad virus.”