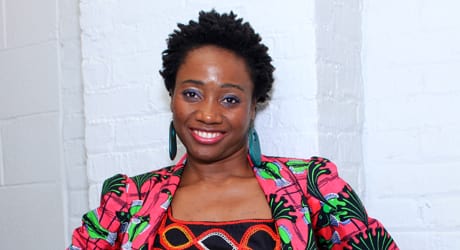 Kibonen NY (pictured) was recently selected as one of 12 featured designers by the ITC Ethical Fashion Initiative in partnership with ‪#‎EyesOnTalent fashion talent scouting agency, adding her to some of the best African designers in their network. This year’s September Issue of Vogue Italia also includes a special edition, featuring Vogue Talents 2015 Fashion Designers. Kibonen NY is one of 200 designers around the world featured in the magazine.

#EyesOnTalent is the online platform used by global design-led brands and publications to discover and connect with today’s best talent. For Kibonen, and other upcoming designers, being selected as a featured designer showcases her work on an important platform.

In fact, many of the past designers who share the distinction of being selected by ITC and #EyesOnTalent enjoy their designs being integrated in to the style offices of the big brands of the group, confirming the quality of their work.

Kibonen got in to the fashion scene in 2009, when she came up with the ingenious idea of revolutionizing the royal regalia of the Tikar people of the Bamileke and Bamenda regions of Cameroon, the Toghu. She further developed her aesthetic vision by creating pieces that don’t only represent the Cameroonian tribes, but are also appreciated by the ultra-modern client who is constantly gaining inspiration from both African tribes and global trends. Kibonen represents her inspirations on textile designs printed on luxurious fabrics with an eye on construction details, shapes, and silhouettes.

The Kibonen NY brand aims to provide a ready-to-wear sportswear line catering to the client who is confident in luxurious quirkiness, who is comfortable with trying the new fashions, and will travel the world through what they wear.

Among other accolades, Kibonen was nominated by Africa Fashion International as the Emerging Designer of the Year 2013. She has successfully showcased her talent at the Art Institutes Mercedes Benz fashion Week NY SS15 and Mercedes Benz Fashion Week Africa SS13 and SS14. She has also been featured in BBC Focus on Africa, GQ SA, Forbes Africa, and the New African Woman Magazine. Her works have also been showcased at the National Museum of African Art – Smithsonian Institution.