Angolan Vice President Manuel Vicente has been charged with bribery, money laundering, and fraud by the authorities in Portugal.

Portuguese state prosecutors say Vicente paid $810,000 (£650,000) in bribes to shut down corruption investigations that he was facing, according to the BBC. The alleged bribes were paid to Orlando Figueira, a former Portuguese magistrate who also faces charges as part of “Operation Fizz.”

Portuguese prosecutors say Vicente paid Figueira, who was arrested a year ago, about $808,000 (£647,000) to abandon investigations in to allegations of embezzlement and money laundering filed against Vicente during his time as the head of the Angolan state oil company Sonagol.

The original corruption investigation, halted in 2012, focused on the origin of money Vicente allegedly used to buy a luxury property in Lisbon, Portugal.

Still, Vicente’s lawyer, Rui Patricio, has described the charges as fictitious, maintaining that his client was unaware of the charges being brought against him; he also slammed the move as a “procedural violation” that invalidated the legal process.

“I’m astounded that my client has been accused, not only because he had nothing to do with the facts mentioned but also because he has never even been questioned about them,” Patricio said.

For its part, Angola has continued to maintain that Vicente is innocent of the charges brought against him, with state officials describing them as “neo-colonialism” and “revenge by the former colonial master.”

Alongside Nigeria, Angola is one of Africa’s largest oil producers and government revenues are heavily dependent on crude oil receipts. For a 13-year period, between 1999 and 2011, Vicente was the head of Angola’s state-owned oil firm Sanogol, a highly influential position that offers easy access to state funds. 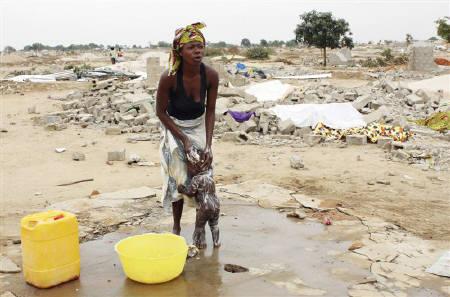 A woman bathes her child in the open next to remains of her home in the Baghdad settlement in Angola’s capital Luanda, July 28, 2009. REUTERS/Henrique Almeida/Files

Despite its immense oil wealth, a greater majority of Angolans have benefited little from the country’s oil proceeds. The country has one of the highest rates of child mortality in the world and many citizens live below the poverty line, surviving on less than $2 a day.

Critics of Angola’s government under President Eduardo dos Santos say much of the country’s oil wealth has gone directly to the pockets of his family and closest aides. Last June, President Santos shocked many when he appointed his daughter, Isabel dos Santos, (Africa’s richest woman) as the new head of the oil company.