May Brown, a British leukemia sufferer who made headlines last year after the Home Office refused to grant her Nigerian sister a U.K. visa so she can donate stem cells, has died.

A statement from the African and Caribbean Leukemia Trust (ACLT) says Brown, 24, died Friday following a relapse she suffered in April.

In January, Mrs. Brown received a stem cell transplant at Kings College Hospital in London, after the operation had been postponed from an earlier date in December, according to the BBC.

Brown was diagnosed with leukemia in July 2015, and doctors said her only chance of survival was an urgent stem-cell transplant.

Fortunately, her sister Martha Williams was a “10 out of 10” tissue match, but Williams, who lives in Nigeria, was denied a U.K. visa because the immigration authorities considered her salary of £222 per month as too low.

The Home Office was forced to reverse its decision, though, after Brown launched an online petition that garnered more than 60,000 signatories by October last year.

Brown eventually received a transplant in March, and doctors considered the operation a success.

According to ACLT co-founder Beverley De-Gale, though, she relapsed soon afterward and deteriorated rapidly.

“The leukemia came back and it came back very aggressively. The doctors tried again to get May back into remission but sadly the leukemia was too strong.”

De-Gale added that the delay in operating on Brown due to the lengthy visa saga may have contributed to her death.

“You never know with any cancer what way it’s going to go, but any delay is never going to help the situation.

“I sadly have to say that could be a possibility but I am not a medical expert.” 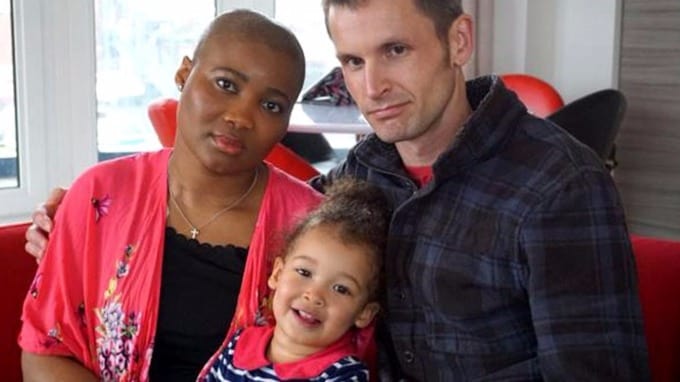 Brown is survived by her husband, Mike, and 2-year-old daughter Selina-May.

In his tribute to her, Mike describes her as a “strong, beautiful, supportive, wonderful wife and mother. Selina and I will truly miss her.”