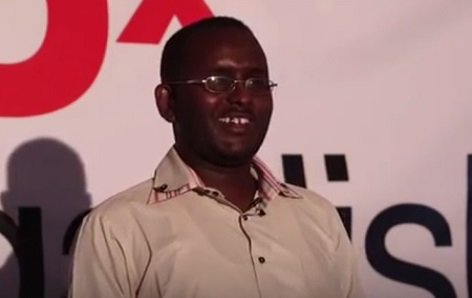 Abdifatah Hassan Kalgacal is a blind journalist in Somalia — Dhacdo.com

He is a visually impaired reporter from Somalia, a country that has, over the years, been ranked among the deadliest for journalists.

Working at one of Mogadishu’s leading radio stations, Kalgacal has been reporting from the Somali capital for the last decade in spite of his condition.

“I had an eye illness at a very young age. But I couldn’t get proper medical treatment due to the situation in Somalia. After the civil war started, I lost all hope of ever seeing again and had no medical support,” he told the VOA in a 2015 interview.

Many advised him against going into the journalism profession due to the dangers involved but Kalgacal did not give up and as at 2015, he was working at Goobjoog Radio Station in Somalia as its senior reporter covering the Somali parliament. He was in March 2015 arrested from his home by the Criminal Investigations Department but was released shortly after.

The husband, father and journalist also hosts a weekly programme for the disabled which empowers them by enlightening them on their basic rights.

Watch his interview with VOA below: