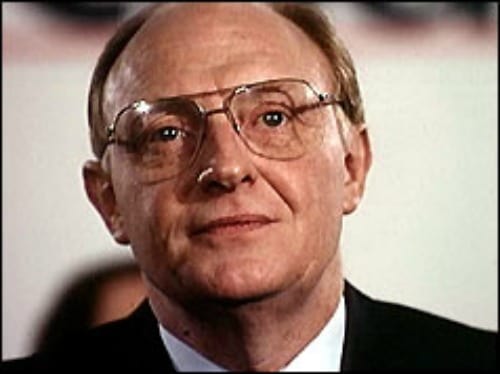 A potential international powder keg event took place in Zimbabwe on this day in 1998. British Labour Party leader Neil Kinnock was held captive at gunpoint by soldiers in the African nation, after his plane landed at the wrong airport.

Kinnock, his wife, three Labour Party aides, and a dozen journalists were on a Zimbabwean air force plane, which landed at a military air strip some 20 miles away from the civilian airport, Grand Reef, in Mutare. Zimbabwean officials and British High Commissioner Ramsay Melhuish were awaiting Kinnock’s party, who were all returning from a trip in Mozambique.

According to the Glasgow Herald, the plane landed at the small airport due to a mistake and a low-ranking soldier aimed his assault rifle at Kinnock and the party.

Kinnock reportedly swore back at the soldiers who held them for one hour inside a small terminal. Kinnock was angered at the soldiers holding him, even though he understand the extreme nature of why they were being held: Security was tightened on air bases after a White Zimbabwean soldier stole a helicopter to defect to South Africa.

Kinnock’s greeting party was told to meet them at Grand Reef, and there was no reason to suspect a ruse as British officials were firmly aligned in the region. Kinnock’s party was eventually set free to rest at a hotel 60 miles away, where the official greeting party met them.

After an apology from the airplane pilots and the officials, Kinnock’s business with President Robert Mugabe was set to resume. Mugabe also apologized publicly and the matter went away swiftly.

British military support was key in Mozambique and Zimbabwe as there was a potential threat from South Africa at the time.