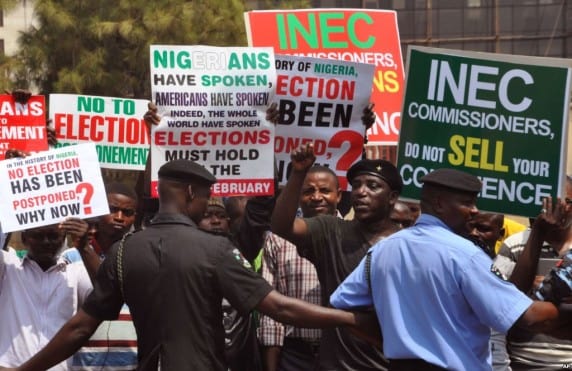 The Independent National Electoral Commission (INEC) shifted the Nigerian elections by six weeks citing insecurity. The Service Chiefs of the Army, Navy, and Air Force claimed they could not provide security to Nigerians against Boko Haram if elections were to hold as previously scheduled.

This development was received with widespread criticism by Nigerians and the international community.

Popular opinion suggests the shift was an attempt by the ruling party to scuttle democracy because polls demonstrated there was a probability of a loss if the elections were held as scheduled.

The Federal Government of Nigeria has lost its credibility, and as usual, President Goodluck Jonathan seems to be unenthusiastic about addressing Nigerians days after the shift.

We at Nigerians Saving Nigerians frown at the meddling of the electoral processes by a failed government, and we urge them not to scuttle democracy.

We stand with the suffering Nigerians who are eager to send this highly corrupt government packing through the ballot box.